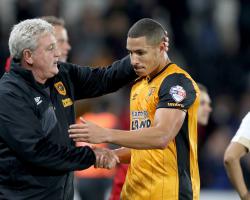 Livermore had not played since May, when it emerged he had tested positive for cocaine following a Premier League match against Crystal Palace.

He was cleared to return less than two weeks ago after the Football Association took the death of his newborn son as exceptional mitigating circumstances and Bruce handed him a starting berth after only a handful of training sessions.

He was given a rousing ovation before kick-off and again when he was replaced after 69 minutes of the Tigers' 1-0 victory, and Bruce hopes it is the start of a new, happier, chapter for the 25-year-old.

"It was a big night for Jake for obvious reasons and I'm sure he appreciated the support he got from our fans," said Bruce.

"He's had the support of the club from the moment this happened and now he's played his first game he can get back on with his career.

"He's been through a tough time, a really tough time, and it's important now he gets his career back on track.

"It's out the way now, he's played again and it was good to see him.

"He'll be delighted to be doing what he likes best again, which is playing football."

David Meyler ensured Livermore's comeback ended in victory, touching the ball over the line after Shaun Maloney's header was palmed across goal.

The Barclays Premier League side could already have been out of sight by then with Eder's charge down hitting the post, Gylfi Sigurdsson denied by a goal-line slide from Curtis Davies and several good chances going to waste.

"We rode our luck a little bit," admitted Bruce.

"We made some really basic mistakes and usually you get punished, but we got away with it.

"We've had a bit of luck but sometimes in the cup you need it."

Swans boss Garry Monk made 10 changes for the match but could hardly believe his second string did not secure victory.

He blamed some sloppy finishing, with Eder and Wayne Routledge notable culprits.

"They scored with pretty much their only chance and we had so many chances it could have been a cricket score in the first half.

"We just didn't take any of them and got hit with a classic sucker punch.

"We showed a lack of composure which was disappointing."

One Swansea striker who did not feature was Marvin Emnes.

He was due to sign for Bolton on loan but the deal fell through shortly before the game, for reasons Monk is still not clear on.

"I only got told when I arrived at the ground that the deal was off," he said.

"In terms of the details I still have to find out

I need to speak to the relevant people to understand what has gone on there."

Hull defender Davies later posted a picture of himself on Twitter, with three significant scratches across his face.

Suggesting the marks had been caused during the game, he wrote: "And they say Diego Costa is 'physical' #Scarface #Claws"