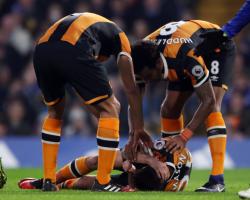 Mason, 26, had 14 plates inserted into his skull and spent eight days in a London hospital following a sickening clash of heads with Chelsea defender Gary Cahill at Stamford Bridge on January 22.

He has been out of action ever since but on Wednesday posted a video of himself running between cones on Twitter and wrote on his post: "Back at it..."

The England international became Hull's record signing when arriving from Tottenham in a ÃÂ£12million deal last August and he scored two goals in 20 appearances before sustaining the injury in a 2-0 defeat to Chelsea.

Mason lay prone for eight minutes after colliding with Cahill as both players had committed to a header and the former was carried off on a stretcher before being taken to St Mary's Hospital in London, where he had surgery.

He returned to Hull's training ground in Cottingham to meet players and staff for the first time last month.

Hull, relegated to the Sky Bet Championship after spending just one season back in the top flight, have not put a timescale on Mason's return to full training.