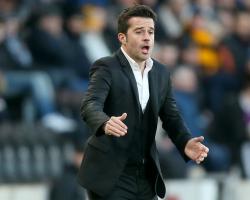 Striker Abel Hernandez struck in either half as Hull hit back from a wretched start, having conceded an early penalty which was converted by Junior Stanislas.

Bournemouth defender Tyrone Mings' own goal after the break gave Hull a two-goal cushion and, in Silva's first league game in charge, they won for the first time in 10 top-flight matches to climb off the foot of the table.

But former Sporting Lisbon and Olympiacos boss Silva was already looking forward to another busy week on the training field and in the transfer market.

"I'm happy, but we have a lot of work to do in the next few weeks," the Portuguese said.

"In one week we've played three games and we've won two games - it's fantastic because in the last two months we didn't win one game.

"I believe in our team and our quality

The players are happy

They're starting to believe and understand better what I want for the team."

Silva was careful not to single out only two-goal hero Hernandez for praise after the Uruguay international scored his third goal in as many appearances since returning from a two-month lay-off due to a hernia injury.

"There was a fantastic atmosphere in our stadium, fantastic support

This is very important for us.

"I said to the press in pre-match that we need them (the fans), we need the atmosphere here because we are stronger with them.

"About Hernandez - it's really important for a striker when they score goals.

His second goal was a very good goal."

The Cherries had dominated most of the first half, but Hernandez headed home Andrew Robertson's inviting cross at the far post in the 32nd minute to spark the Hull comeback

We were in control of the game," Howe said

"I just felt we didn't really go for the throat

"From that moment we never really got control back."

"Today, 1-0 up away from home, you expect to be more solid, to see the game out in a professional way," Howe added

"I don't think we created a huge amount of chances and we got punished and that's something that has to change."