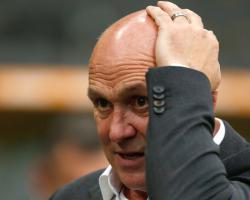 Following Mike Phelan's sacking by Hull on Tuesday, a total of 95 permanent managers have been dismissed, resigned or left a club by mutual consent since the start 2006-07 pre-season

The month of December, just before the start of the January transfer window, has seen 19 men out of work in the last decade, while May, which marks the end of the season, accounts for the same number

Alan Pardew, sacked by Crystal Palace on December 22, and ex-Swansea manager Bob Bradley were the latest men to be relieved of their duties in the final month of the year, with the latter lasting just 85 days at the Liberty Stadium

Roberto Martinez and Louis van Gaal, dismissed last year by Everton and Manchester United respectively, were the most recent departures during the month of May

July and August, when clubs are in pre-season training and kicking off their new campaigns, have historically seen the fewest departures, with just two in each month in the last 10-and-a-half years

Another ex-Palace boss, Tony Pulis, was the most recent August departure when he left Selhurst Park 48 hours before the start of the 2014-15 campaign, while Martin O'Neill resigned from Aston Villa ahead of their league opener against West Ham in 2010

Perhaps surprisingly given the closure of the transfer window, February is a busy month for managerial departures, with nine men, including Mick McCarthy (Wolves, 2012), Rene Meulensteen (Fulham, 2014) and Paul Lambert (Aston Villa, 2015) , leaving their roles once it has become too late for their successors to buy new players

Eight of the 95 departures have come in October, March and November each account for seven, while there have been five in January, and four in both April and September