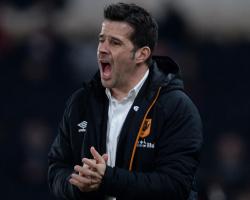 Silva, appointed as Mike Phelan's successor on Thursday, saw goals from Abel Hernandez and local boy Josh Tymon secure the Tigers their first win in all competitions since November 6

But a crowd of only 6,608 was there to see the FA Cup third-round tie at the KCOM Stadium due to a boycott by Hull fans in protest against the club's owners

"It's important for me that our fans believe in our team because we need help," said the 39-year-old former Sporting Lisbon and Olympiacos coach

"We need the other fans to support our team because to change the situation, to change our position in the table we need them

"I hope in the next (home) game against Bournemouth there will be more people to help support us to try and win the game."

Silva, who won the Portuguese Cup with Sporting in 2015, told his players to put the club's off-field troubles to one side

"With a good atmosphere it's better, sure," he said

"If the atmosphere's not good, I want my players to focus on things happening on the pitch

"But I hope the next game we can change the situation."

Silva appeared to show the Midas touch in his first game in England, with each of his three second-half substitutes contributing in the two goals

Hernandez marked his first appearance since being sidelined by a hamstring injury in early November by breaking the deadlock in the 78th minute and 17-year-old Tymon scored his first senior goal in stoppage time, just minutes after stepping off the bench

Shaun Maloney, the third substitute, played a part in both goals and Silva said he had been fortunate with his replacements.

Today it's been very good," he said.

"I took a little risk in Abel Hernandez because he hasn't played much, but he's an important player for us."

Silva, without injured pair Curtis Davies and Harry Maguire, saw fellow centre-back Michael Dawson forced off with a shoulder injury in the second half, but Silva said he hoped his captain would be fit for next week's visit of Bournemouth.

Swansea head coach Paul Clement, installed as successor to Bob Bradley on Tuesday, was far from despondent after his first game in charge ended in defeat.

The 44-year-old former Bayern Munich assistant, who made six changes to the starting line-up, said both he and his players had been affected by the paltry attendance.

"The crowd, the atmosphere surprised me," Clement said

"I was expecting a bigger crowd.

"We found it strange

It was quiet, with not many supporters, which is different to what I've been used to recently.

"I thought it affected the intensity, there wasn't not much tempo to the game

We were looking for more than that

We're looking to play with much higher intensity."

Clement confirmed he expected to draft in some new players this month, but had been pleased with his side's display.

"I wanted to win the game and so did the players," he said

"Most importantly I wanted a performance and for long periods I got one.

"I thought the game was quite even

It was certainly closer than 2-0."