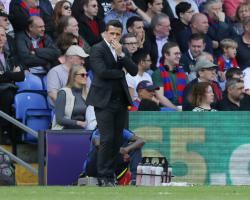 A 4-0 defeat at Crystal Palace confirmed they would finish in 18th place and return to the Sky Bet Championship, and attention will now inevitably turn to the matter of Silva's contract, which expires at the end of the season.

The Portuguese, 39, had impressed in keeping them in contention to preserve their Premier League status after he inherited a struggling team with little stability back in January.

They had begun the season as favourites for relegation, with Mike Phelan as their caretaker manager, and with only 13 fit senior players.

Since his appointment SIlva has proved himself as a fine manager with the improvement he has overseen, but goals from Wilfried Zaha, Christian Benteke, Luka Milivojevic and Patrick van Aanholt finally took survival beyond them.

"Now is not the moment to talk about the future of the manager," said Silva, understood to be a target for Southampton should they look to replace Claude Puel.

"It's about the future of the club.

"I will talk to the board and the chairman first, talking inside the walls of the club

It's easy (to see) what the club needs to do differently.

We tried to do many things in January, but it's not good to be signing six or seven players in January, and losing two

You should be doing that in June, in pre-season

You need to prepare better.

"The most important thing is for the club to understand what they did in a bad way, to prepare

It's clear we did our best, to try and play at a higher level, and to fight until this moment.

"Now we have to analyse it

I will give the board and the chairman my opinion, about what they need to do differently to make sure this doesn't happen.

"We'll talk in the next few days

We will talk before the Tottenham match

We'll see (if I will be manager next season)

I have enjoyed these four months in the Premier League

That was one target I had in my career, and we tried to do our best

Now it's time to be calm and see what is best, first for the future of the club, and also for my career as well."

They required only a point, but all three took them up to 13th, and the manager insisted the achievement was greater than when he rescued Bolton, Blackburn, Sunderland or West Ham.

"I said to myself this would be the hardest one, given the quality of the teams we had to play on the run-in," said the 62-year-old.

That's something we'll discuss in the future

"If you've got the label, you accept it (as a fire fighter), but building for the future relieves the stress on you

It's about building for the future."