Marco Silva not getting carried away despite improved Hull form 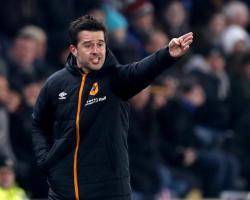 Seven points from four league games against Bournemouth, Chelsea, Manchester United and last week's win against Liverpool have lifted Hull to within a point of safety, but Silva insists the enormity of his task remains undiminished

But we have won nothing," he told a press conference before Saturday's game at the Emirates Stadium against Arsenal

"It's important when we achieve good results and the last result was very good for us, but only that, nothing more.

"It gives us more confidence and shows not only me but the players this is the right way, but we need to continue to do our work."

"We took three points from our last game, but nothing more," he said.

"Of course it's going to be really difficult to achieve our goal, to keep the club in the Premier League.

"But we have this confidence and need to continue our work.

"I want my players to keep their feet on the ground because we have achieved nothing at this moment."

Saturday's trip to the capital completes a daunting sequence of fixtures that could have cemented Hull to the foot of the table.

Three games against teams in the bottom half follow

Burnley visit the KCOM next week followed by crunch clashes with relegation rivals Leicester and Swansea.

If Silva already has one eye on those, particularly the last two against teams immediately above them, he was not letting on.

The former Olympiacos coach, who knows how to win at the Emirates after guiding the Greek champions to an unlikely Champions League win there last season, said he was focused only on Arsenal.

"The most important always is the next game and that's against Arsenal," he added.

"This is what's on our minds and what we prepare for this week.

"We don't talk about Burnley and of course about the others, we talk only about our work for the next game and what's on our minds is only Arsenal."

But midfielder Ahmed Elmohamady is available after returning from African Nations Cup duty with Egypt.