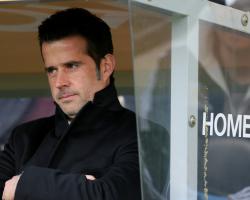 The Tigers currently sit 17th in the table, two points clear of Swansea with four games left, but they have been unable to pick up points on the road despite boasting an impressive home record.

Silva's side have won four home games on the bounce to boost their chances of staying up, but a poor away record means they have failed to pull away from Swansea, who kept pace with a 2-0 win over Stoke.

Last weekend's win over Watford maintained an unbeaten home record under Silva, but they are currently without a win away from the KCOM Stadium since August 20 and have lost the last five on the trot, with Silva acknowledging the need to alter their approach

"We analysed the last game like normal, and I think it's clear to me and I hope it's clear for our players what we need to do differently

We lost last time we played away.

We need to keep focus, we conceded goals away on the counter-attack.

"It is important we understand this situation and keep our concentration always."

He added: "We prepare in the same way and change nothing for games away or home and I want our players to play the same way.

"Of course it's not easy - I want our players to play football, be focused, respect our plan and play with confidence."

Hull come up against a Southampton side who gave a good account of themselves against Chelsea on Tuesday night, despite a 4-2 loss, and Silva is wary of the threat posed by the ninth-placed Saints.

good ideas with very good individual players with the capacity to have good ball possession, keep the ball and find the right time to attack the opponent.

"It is important we understand where they are strong and of course the weaknesses."

Silva has been boosted by the successful appeal against the straight red card shown to Oumar Niasse in the first half against Watford.

The on-loan Everton forward had been due to miss the next three matches after Robert Madley sent him off for a challenge on M'Baye Niang, but the Football Association overturned the decision following an appeal from Hull.

Niasse, who has been an important player for Silva, is expected to lead the line once again at St Mary's, and Silva admitted it was a fair decision.

"It is important," he said

"It's important to have all the players available.

If we lost him for the next three games it would be unfair."