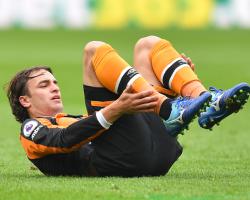 Serbia international Markovic, 23, on loan from Liverpool, sustained an ankle injury in last week's home defeat to Sunderland and will miss the Tigers' last two matches.

Hull must win their first league game on the road since August on Sunday at relegation rivals Crystal Palace and hope Swansea have failed to win at Sunderland 24 hours earlier in order to climb back out of the bottom three.

"It's not good news about Markovic's injury," Silva told a press conference

"But it's football, it's our life.

"Of course he is an important player

He's done good things for our team since he came, but now is the moment to find another solution.

"We need to give confidence to the other players who play in that position."

Markovic has appeared in 14 of Hull's 16 games in all competitions since arriving from Anfield in January, adding much-needed pace and width to a side which has struggled, especially on the road, all season.

Silva will be boosted by the return of right-back Omar Elabdellaoui, who has missed the last seven matches due to a back problem.

Last week's home defeat to already-relegated Sunderland was a major setback for Silva, who took on the onerous task of keeping the Tigers in the top flight in January.

Victory at Palace would lift the Tigers to within a point of Sam Allardyce's side and heap the pressure on the Londoners going into the final day.

"It was not good last Saturday," Silva said

"After the match it was not easy in the dressing room, but it's our obligation and it starts with the manager to put the players in the right way, to fight again."

Silva said it would take "a miracle" to keep the Tigers up when he replaced Mike Phelan at the turn of the year, but he has still not given up on pulling it off.

When asked if there could be a final twist in his side's battle for survival, the Portuguese said: "Of course, it's possible.

It's important for us

We won't change anything

We need to win the game and will work hard to do that.

"Now it's a fight between the three clubs

When we were out of the bottom three I always said to you that it would not be decided until the end.

"But until the end we will fight

Three or four weeks ago everybody thought it was between ourselves, Middlesbrough and Swansea and nobody put Crystal Palace in the fight.

"Now, of course they're in a better position than us, but they need to do something to (make themselves) safe.

"We have two finals now and the first is on Sunday and we will play it like a final and will continue to believe."