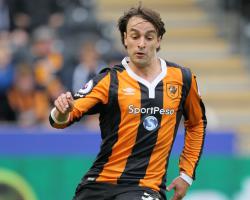 The Serbia international broke the deadlock after the interval as Hull overcame the controversial first-half dismissal of Oumar Niasse, with Sam Clucas crashing home the game-clinching second nine minutes later

"We sensed that the fans believed in us all the way through even after the red card and as players we believe we can stay in this league," Markovic told the club's official website

"We have to thank the fans for their support against Watford and I'm happy to be a part of this fight."

Markovic, 23, who arrived on loan from Liverpool in January until the end of the season, opened the scoring in the 62nd minute

A textbook counter-attack ended with Markovic heading Kamil Grosicki's ball in against the crossbar, but the Serb followed up to fire home the rebound

Niasse inadvertently caught his opponent on the shin but it was not a studs-up tackle and Silva confirmed Hull will be appealing against the dismissal.

Silva's side sealed the points in the 72nd minute thanks to Clucas' dipping, 25-yard shot following Grosicki's half-cleared corner.

That strike capped another accomplished midfield display from Clucas, whose stamina and excellent distribution throughout will have only heightened speculation linking him with an England call-up.

"I've been waiting for one of those all season to be fair," said the former Lincoln trainee.

"My position's on the edge of the box

I've been waiting for one to come out so I can have a go and fortunately it came off."

Clucas quickly turned his attention to next week's trip to Southampton, where Hull will bid for only their second win on the road in the Premier League this season.

"We've got to go away from home, play well and put a performance in and hopefully that will start next week."

Watford began the day in 10th place, all but safe on 40 points after the previous week's home win against Swansea and they failed to match Hull's intensity, particularly in the second half.

The Hornets spurned several chances to have taken the lead

Sebastien Prodl's first-half header was well saved by Hull goalkeeper Eldin Jakupovic, while Nordin Amrabat, Miguel Britos and, in the second half, Etienne Capoue were all guilty of failing to convert.

"We made silly mistakes," said the Italian

"It's one of those games that, if we didn't win, we should have drawn and this makes me really angry."

Mazzarri was also unhappy at the home fans' treatment of Niang, who was roundly booed every time he touched the ball following the challenge which led to Niasse's dismissal.

"I really don't understand why they booed him," Mazzarri added

"It's really nothing to do with him, and it's not his fault.