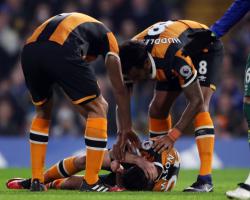 The Tigers' club-record signing, 25, who fractured his skull during Hull's 2-0 defeat at Chelsea on January 22, visited team-mates and staff in Cottingham on Friday

"The club was today delighted to welcome back Ryan Mason to the University of Hull training ground for the first time since sustaining a skull fracture in our Premier League fixture away at Chelsea in January," Hull said in a statement

"The 25-year-old midfielder met up with players and staff at the training ground this afternoon.

"There will be no further comment from the club with regards to Ryan's return to the training ground.

"We also ask that people continue to respect Ryan and his family's privacy during his rehabilitation period."

The England midfielder joined Hull from Tottenham in August last year for a club-record undisclosed fee, reported to be in the region of ÃÂ£10million