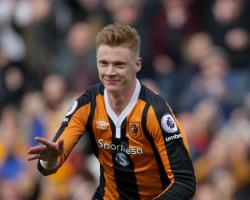 Niasse was shown a controversial straight red card midway through the first half by referee Robert Madley for the striker's challenge on M'Baye Niang.

But the Tigers overcame their setback with fine second-half goals from Lazar Markovic and Sam Clucas.

Television replays showed Madley's decision was harsh and it appeared to have dealt Hull's bid to stay out of the Premier League relegation zone a huge blow.

"Of course, we will appeal," said Silva, whose side remain two points clear of third-bottom Swansea with four games to play.

"I don't want to talk too much (about it) because I respect the work of the referee, it's not easy.

"We all make mistakes

I make mistakes sometimes, the players, referees as well.

"One decision was not good to us

The referee gave us problems

We achieved the win, but it wasn't easy."

The Tigers have now won six of their last seven league games at home under Silva, taking 19 points from a possible 21, and the Portuguese was delighted with his side's performance.

"It's another really important three points from a tough game after fantastic work by our players," he said

"We played 65 minutes with 10 players against a good team, a team comfortable in the table after achieving 40 points last week, and they have good players

It wasn't easy for us.

"That red card gave us problems

We played together again."

"I'm happy because we took another three points," Silva added

"But I told you the last time, this fight will continue to the end."

Watford began the day in 10th place after last week's home win against Swansea and could not match Hull's intensity, particularly in the second half

Boss Walter Mazzarri said his side paid for missed chances

Sebastien Prodl's first-half header was brilliantly saved by Hull goalkeeper Eldin Jakupovic, while Nordin Amrabat, Miguel Britos and, in the second half, Etienne Capoue were all guilty of failing to convert when well placed

"When they were reduced to 10 players we dominated and produced four or five chances to score," Mazzarri said

"That's where we need to improve, up front

We should have scored at least one or two goals

"We underestimated the danger and in their first counter-attack they scored."

Mazzarri was gracious in defeat, however, and applauded Hull for their victory

"They were very good

Congratulations to them," the Italian added

"They were really concentrating and it was hard for us

They're doing really well at home, winning six out of seven, so congratulations."