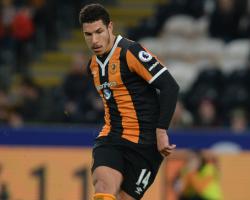 Livermore, 27, completed his permanent move to West Brom on Friday morning after Hull accepted a second bid, understood to be around ÃÂ£10million.

Hull are expected to announce the loan signing of defender Omar Elabdellaoui on Friday - Silva's former club Olympiacos have confirmed the deal - but the Portuguese said he must now move quickly to find a replacement midfielder for Livermore.

"If you asked me if I wanted to lose Jake, my answer is no," Silva told a press conference before Saturday's game at Premier League leaders Chelsea.

The deal is closed

"What we need in this moment is to find a quick replacement for this player because we've lost an important one."

When asked if he will be handed the money from Livermore's sale to strengthen his squad, Silva said: "Yes, it's important because we have a budget and you know it's not a big budget to find the best solutions."

The 25-year-old right-back, a Norway international, spent last season at Greek champions Olympiacos under Silva before the latter left the club

Silva has now drafted in three new players since replacing Mike Phelan earlier this month, with on-loan Everton striker Oumar Niasse and midfielder Evandro, for whom Hull paid an undisclosed fee to Porto, both making their debuts off the bench last week against Bournemouth

Meanwhile, Silva is hopeful of keeping hold of winger Robert Snodgrass at least until the end of the season

The Tigers have turned down multiple bids from West Ham and another from Burnley, reported to be ÃÂ£7.5million, for the Scotland international

Tigers fans are braced for further offers for star player Snodgrass, who is doubtful for Saturday's trip to Stamford Bridge due to a muscle strain

"I don't have news about Snodgrass," Silva said

But about transfers, nothing."

Silva said he was working hard to bring other players in during the current transfer window, but admitted that was proving a difficult task.

"I have the solutions in my mind, but sometimes it's not easy to make the deals," he added.

I have them in my mind but when a coach wants a player, it's not easy for the player to come."

Silva has no other new injury or suspension problems, while midfielder David Meyler could be available after returning to full training this week.