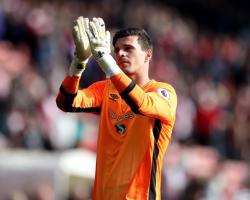 Jakupovic was reported to be set to join Leicester for a fee of around ÃÂ£2million but the Tigers, braced for the expected departures of several players following relegation, claim no bid has been made.

"Contrary to a report in the media (on Friday) morning, the club would like to place on record that we have not accepted any offers or received any bids for Eldin Jakupovic," Hull said on their official website

"The club will always confirm transfers if and when they are completed and announce via our official channels."

Jakupovic established himself as the Tigers' number one last season and enhanced his reputation with several outstanding displays.

He has represented both Switzerland and Bosnia at international level and has a year left to run on his current Tigers contract.

Leicester completed a deal to sign central defender Harry Maguire from Hull on Thursday for a reported fee of ÃÂ£17million.

Fellow defender Curtis Davies joined Derby for an undisclosed fee earlier this month, while Andrew Robertson and Tom Huddlestone have also been linked with moves away from the KCOM Stadium.

Tony Pennock returned to Hull on Thursday for his second spell as assistant manager to work alongside Slutsky.

Pennock left the KCOM in January in the wake of Mike Phelan's sacking.