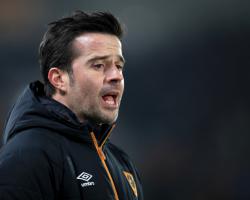 Silva, who has seen his Premier League strugglers knocked out of the EFL Cup and FA Cup in the last week, is concerned about the depth of his squad as he contends with a growing injury list.

Hull have eight players sidelined, including Ryan Mason who fractured his skull last week and Curtis Davies who limped off with a hamstring injury in Sunday's 4-1 defeat at Fulham

Those injury absentees, combined with the sales of Jake Livermore and Robert Snodgrass, have severely depleted Silva's options and - despite the arrival of five new players during the transfer window already - the Portuguese admits they need more reinforcements

He said: "We need to put more players in our squad to change this situation because it is not easy to play all the games and keep players fresh

"We need to put quality players in our squad

We need three or four players.

"We will see what happens

The heavy FA Cup loss to Championship side Fulham came hot on the heels of Hull's exit from the EFL Cup semi-finals, where despite beating Manchester United at home in Thursday's second leg they went out 3-2 on aggregate.

Silva shuffled his pack between the games, making seven changes for the trip to Craven Cottage, but the former Sporting Lisbon boss feels he is limited to what he can do due to the lack of senior players available.

Sliva, whose team are second bottom in the Premier League and face Manchester United, Liverpool and Arsenal in their next three games, said: " We have tried to do rotation last Thursday and again here but it's not easy with only 15 or 16 players

With this comes problems

"We've had to use players from our academy, good players, but in this level we need more quality and more numbers.

"To get what we want at the end of the season, to keep this club in the Premier League, we need more players to be competitive in all the moments."

Lazar Markovic, having signed on loan from Liverpool last week, made his first start for Hull on Sunday b ut Silva stressed it will take time for him, and the other new signings, to produce their best for the club

Silva said: "Lazar is one player like the others, he needs to understand what we want.

"The other (new signings) have worked with me for 22 days to see what I want.

"It is not only Lazar, all the players need time to understand what we want

I know we don't have a lot but after this week, with two games again, we have a full week to work and prepare for games

Our team will improve."

Fulham, who are 11th in the Championship and fighting for a place in the play-offs, are into the fifth round of the FA Cup for the first time since 2011.

He said: "It was a good performance against a Premier League team

We tried to find our style and scored four goals against a strong side.

"The FA Cup is the most important cup competition in the world so we're excited for the draw on Monday.

"I don't want to play a strong Premier League team - I want to be lucky and draw a League One or League Two side and keep going."