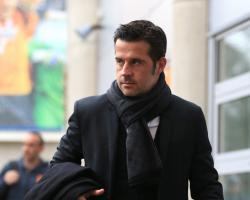 Tigers' substitute Oumar Niasse struck twice after stepping off the bench in the second half before Swansea defender Alfie Mawson's stoppage-time header ensured an anxious finale.

But Silva's side held on to secure their first league win in four matches and climbed to within three points of the Welsh club.

"The first half was a very balanced game," said Silva, whose side registered their third league win since he replaced Mike Phelan in early January.

"I felt some of our players, our team, were anxious, a little bit nervous

The last decision needed to be better.

"It was different in the second half

We played a little faster and were more effective with our last decision."

Silva sent on Niasse for midfielder Alfred N'Diaye in the 63rd minute and the Senegalese combined with strike partner Abel Hernandez to break the deadlock six minutes later.

Another substitute, Ahmed Elmohamady, then supplied the cross for Niasse to lash home a decisive second 11 minutes later.

"After 60 minutes we needed to play with a different system, with a little bit more risk and our two strikers did very well," said Silva, who acknowledged the significance of his side's victory.

"We met our obligation," he added

"We played at home with our fans and their support, so congratulations to our players and fans as well.

"Now is the time to rest and keep our progress, to keep doing our work and to continue our fight."

Swansea made the better start and could have been two goals up before Niasse's introduction, while the first-half withdrawal of defender Angel Rangel and leading goalscorer Fernando Llorente through injury upset their rhythm.

Wayne Routledge spurned a clear opening when firing against Eldin Jakupovic's legs in the first half and blazed over the crossbar from seven yards in the second after the Hull goalkeeper had pushed Tom Carroll's cross straight at him.

"We came here to win the game, that was our objective," said Swansea head coach Paul Clement, whose side had won five of their eight previous league games since he took charge at the start of January

"We spoke before the game about it, we spoke at half-time about it

We also said a draw wouldn't be a bad result

It wouldn't have been.

"The fact that we lost it is very good for them and congratulations to them as well because there was a lot of pressure on Hull to get the result and they delivered."

Clement is waiting to learn the full extent of the injuries to Rangel and Llorente and also revealed left-back Martin Olsson sustained an ankle knock.

"Llorente has a dead leg, Angel Rangel has an injury to his foot or ankle, but I don't know how severe that is, and there's a contact injury on Olsson's ankle," Clement added

"I would have taken him off if I had another substitute available, but he was able to continue and it won't keep him out for too long."