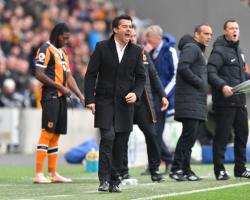 The Portuguese has worked wonders since his surprise January appointment at the KCOM Stadium, bringing hope to embattled City thanks largely to their superb home form.

The 2-0 reverse handed Swansea the chance to send Hull into the drop zone, but a clearly-frustrated Silva called for his side to stay calm.

"Of course it is not a good moment for us, but nothing finished this afternoon," the Tigers boss said.

"Even if we achieved a good result today, these are my words to you

Of course it is a not a good afternoon for us but it doesn't change nothing.

"We need to work hard during the next week to prepare for the next game, and after the last game as well.

"Of course it is not a good moment but this is a moment to be calm because, for me, it is clear this afternoon our players don't play calm.

They tried to do everything too fast in some moments, not be calm.

"If you're not calm, it is impossible to play well."

Silva's frustration extended to the officials, having felt Hull should have been awarded two penalties and that Defoe was offside for Sunderland's second.

"Every week the same thing happens with our team," he said

"It is not easy for me to talk (about) and I don't like really to talk every week about the referees.

"But again it is not is an excuse for me

The football, we didn't play well

"The second goal, my staff said to me, is offside again and I think the moment with (Harry) Maguire in the second half (was a penalty)

"I said the other week that the performances have been threatening results," the Scot said

"I think the result was coming and it was too late to help us with relegation, but I think the performance was good."

"He is under contract by us so that's the big thing," Moyes said, before likening Pickford to a young Joe Hart

"Good players and English players are at a really high premium, so I saw some rubbish figures getting talked about in the paper today

Whoever came up with them were completely wrong

"But we do know how good Jordan is and wherever Jordan goes, if he goes, then that would need to be a really, really big price

"It'll certainly not be a cheap price if anyone wants Jordan Pickford."