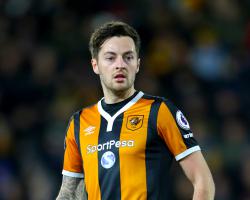 Hull were on Monday awaiting an update on the condition of Mason, who on Sunday night had surgery at St Mary's Hospital in London.

The 25-year-old midfielder was carried off and received oxygen after a clash of heads with Gary Cahill during the first half of Hull's 2-0 loss at Stamford Bridge.

Headway chief executive Peter McCabe said: "I was actually at the match and, while it was upsetting to witness the incident, it was encouraging to see the exemplary reaction of the medical teams.

"Headway has been critical of the way in which head injuries have been treated in many high-profile football incidents in recent years, but it is positive to see that lessons appear to have been learned."

Mason received treatment for around nine minutes on the field and later received messages of support from many of his fellow professionals.

The club expect the former Tottenham midfielder to be in hospital "for the next few days".

Chelsea head coach Antonio Conte expressed hope that Mason would make a quick recovery immediately after the match, prior to news of his operation.

The England defender had been assessed for some time during the break in play as Mason was attended to.

Headway did not reference Cahill in its statement and it is not possible to make head injury assessments from afar.

The charity last September questioned whether concussion protocols were being observed in football, calling for an independent review after an incident involving Manchester United's Anthony Martial.

Headway's concerns surrounded whether rules introduced in August 2014 were being applied, not specifically the treatment of Martial.

The regulations include the employment of a third 'tunnel doctor' to help team medics identify concussions and whether a player is fit to continue.

Headway favour an approach where, if there is any doubt over a player's fitness to continue, they are withdrawn from the action.