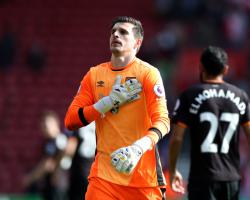 Hull pulled off a gritty goalless draw at Southampton, with Jakupovic palming away Dusan Tadic's late spot kick as the visitors held out for a potentially priceless point.

Just as a low-quality affair at St Mary's appeared to be petering out to a dull finish, Alfred N'Diaye hauled down Maya Yoshida in the box.

Tadic lined up the penalty, only for Jakupovic to guess right, and palm the ball to safety.

Portuguese boss Silva has now guided Hull to 21 points from his 15 league games at the helm, and that transformation could yet be enough to save his side from the drop.

Hull now host David Moyes' Sunderland next weekend, where they will be desperate for a victory that could propel their safety charge still further.

A listless first-half ended devoid of goals, chances or excitement.

Southampton were booed off the field by a justifiably disgruntled home contingent.

The interval handed Saints the chance to shout themselves into something resembling urgency, but not even the hackneyed half-time hurry-up had the desired effect.

Sofiane Boufal tried to tiptoe through traffic rather than blast in a half-volley, and paid the price when Harry Maguire pounced with a crucial intercept.

Tadic saw a shot deflected when he ought to have laid off to the lurking Boufal t hen Nathan Redmond shot lazily over from 20 yards, ignoring the Serbian's fine run

The desperate Saints boss Claude Puel clutched at the straws of substitutions, only to be booed by his own fans for hooking Manolo Gabbiadini just shy of the hour.

The Italian hitman feeds off chances created by his team-mates, but was forced to endure a puzzling famine in this miserable encounter.

Shane Long should have pulled the trigger when through on goal, but his inside flick again allowed Maguire to come to Hull's rescue.

Hull's indomitable centre half produced yet another telling challenge when sliding in to ensure Redmond's low cross could not reach the lurking Tadic.

Oumar Niasse wasted a rare opening for the visitors when blasting over from the edge of the area as the game drifted towards the close - only for a madcap final few minutes that left Saints frustrated and Hull breathing sighs of relief.