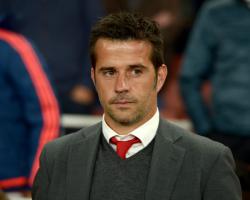 Phelan, 54, was sacked on Tuesday night having only been installed as permanent boss in October and former Olympiakos boss Marco Silva is understood to have been lined up to take over.

Portuguese Silva quit Olympiakos for personal reasons in the summer after guiding them to the Greek title in his one season in charge.

He also won promotion to the Portuguese top flight with Estoril before a brief time in charge of Sporting Lisbon but Ashbee feels his appointment would be a gamble.

"Whoever it is will want to know what backing they'll get in the transfer window," Ashbee told Press Association Sport

"He's got good stock from overseas, but has no experience of the Premier League.

"It's a difficult task even if he had the whole of pre-season to put his plans in place, but it would appear to be impossible now."

Gary Rowett, sacked by Birmingham last month and replaced by Gianfranco Zola, was an early favourite with bookmakers for the new vacancy at the KCOM Stadium.

But Ashbee, who played in all four divisions for the Tigers during a near nine-year spell at the club, does not think Rowett will want the job.

"I don't think Gary Rowett is going to take it," Ashbee said.

"It's a poisoned chalice

I think someone from overseas will be appointed

Someone who isn't aware of what's been going on."

Tigers owner Assem Allam has presided over two promotions to the top flight and an FA Cup final appearance since rescuing the club from financial turmoil six years ago.

But the Egyptian-born businessman put the club up for sale in 2014 after the FA rejected his bid to change their name to Hull Tigers, a move which was vehemently opposed by the majority of Hull's fans.

The Allam family has since come under increasing pressure from supporters, whose discontent with how the club was being run intensified following the departure of former manager Steve Bruce in July.

The Allam family announced they hoped to sell the club to a Chinese consortium in September but the deal broke down, while several other consortiums have been involved in takeover talks without anything being finalised.

"They should have gone at the end of last season in my opinion," Ashbee added

"The situation at Hull is chaotic

You cannot start the season with 14 fit senior first-team players, which is what Mike had - that's ludicrous.

You've got to feel sorry for him in that respect.

"Relegation is looming and you can't deny it