Bruce gave his backing to Evans 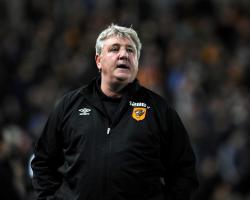 Oldham pulled the plug on a deal on Thursday after a storm of opposition but Bruce said he believed Evans should have been given a second chance.

The League One club's chairman Simon Corney had said three Premier League managers had offered him their support and Bruce confirmed he was one of those.

He told a news conference: "I have to be honest and say yes.

"I've known Simon for a lot of years now

He'd looked at the case too

He was of the opinion to give the kid a chance

I can only say on behalf of myself, I know I might be upsetting people but there is a question of the rape and how he's been convicted by a jury.

"When you look at the evidence, it is there for appeal."

Evans was refused leave to appeal but his case is now going before the Criminal Cases Review Commission (CCRC).

Bruce added: "I'm a big believer that if you have done your time everyone deserves a second chance, we have seen footballers involved with accidents and being given a second chance.

"It's a very difficult situation for everyone concerned

It's a pity they could not have the appeal and get it over and done with.

"It has divided opinion of course and when you look at the case in detail and, I don't think most people have really, because they have just seen Ched Evans as a convicted rapist, when you do look at the case and look at the evidence then certainly Ched has got a case.

"For me the appeal can't come quick enough for Ched

It must be a frustrating and difficult time for him and I think the events of the appeal, for me, will see Ched be allowed to play football again."

The CCRC is an independent public body that reviews possible miscarriages of justice in the criminal courts of England, Wales and Northern Ireland and refers cases to the appeal courts .