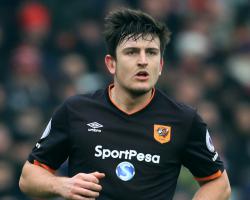 Maguire's three crucial interventions ensured Hull tiptoed out of St Mary's with a point that could prove priceless to their Premier League survival fight.

Eldin Jakupovic's added-time penalty save sealed Hull's first point on the road since February, in the process condemning Sunderland to relegation.

But Maguire's indomitable showing snuffed out Saints time and again, to leave Silva expecting a career to remember from the 24-year-old who is already coveted by a host of Premier League rivals.

"That performance is no surprise to me, because he's played like that and been improving for a while now," said Silva of Maguire.

"He has very good skills and it's clear to me he will have a big career in the future.

"But it was not only Harry, both our centre backs have a very good relationship with the ball

I want those players to start off our play and build us up from the back."

Sunderland had to better Hull's result on Saturday to stave off relegation, but had their demotion confirmed via their 1-0 home loss to Bournemouth.

Hull will now host David Moyes' Black Cats on Saturday with another gilt-edged chance to boost their chances of survival.

Silva has dragged Hull to 21 points in his 15 league matches at the helm since his January arrival, and now he has challenged his players to seize the momentum gained by sealing just their sixth point of the season on the road.

"We have to make sure we use this to boost our confidence," said Silva.

"It's clear we need to improve our away form, but often we have played well without the final result

It's not a win but it's an important point for us."

Claude Puel criticised his lacklustre Saints for failing to generate any tempo in their approach play, before refusing to offer any assurances about striker Shane Long's future at St Mary's.

Italian hitman Manolo Gabbiadini's January arrival has bumped Long down the Saints pecking order, and Puel insists any discussions on players' situations must wait until the end of the season.

"We will see to all this at the end of the season," said Puel.

"Of course all the players want to play, but it's important to have players with different profiles.

"Shane's quickness can give us different solutions.

"But it's not the moment to speak (to him) about this.

"All the players are focused on the last few games of the season.

"We were too slow and there was no intensity

It was up to us to find other solutions, but we were too slow in our play to make the difference

That's all our responsibility."