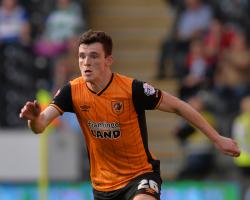 The Tigers' remarkable resurgence under Marco Silva came to a shuddering halt on Saturday, when David Moyes' Championship-bound side condemned them to their first home defeat of 2017.

Anxiety-wracked City succumbed to second-half goals from Billy Jones and Jermain Defoe, with the 2-0 loss compounded by relegation rivals Swansea winning against Everton.

Hull fell into the drop zone as a result and now have just two matches to claw themselves clear.

"It was one of those days," left-back Robertson said of the Sunderland defeat.

"We knew what was at stake today and you know for the first 60 we've probably dominated them without really creating clear-cut chances and that's we needed to.

"Their goalkeeper has pulled off two unbelievable saves, to be fair, but you can't let a team that has just been relegated come and beat you 2-0

I don't care what anyone says.

"Probably not enough of us showed up today."

Robertson revealed Silva had highlighted in the build-up the home loss to Burnley at the same stage of the 2014-15 season - a campaign that ended in relegation.

History repeated itself in terms of the result and Hull's survival hopes now look bleak.

"The whole season people have written us off, from day one going into the Leicester game," Robertson, speaking before the Swansea match, told Tigers TV.

"But I've no doubt people will be doubting us again because that's what they do and they put us down.

"But this squad of boys, the core is special and we need to dig deep now.

"We need to rely on the people that have been there and done it, and pull the people through that need (to be) pulled through and lift people's performances that need lifting.

"If we can do that, I am sure we can hopefully get positive results in the next two games

And at the end of the season be above that line."

Hull have a trip to Crystal Palace and home match with Tottenham remaining, whereas Swansea end the campaign at home to West Brom after travelling to Sunderland.

The Black Cats are preparing for life in the second tier and under-fire manager Moyes wants to build on the morale-boosting defeat of Hull against the Swans.

"We have not had that (winning feeling) for a long time and it is good for the players to feel better about themselves," the Sunderland boss said.

"We can go into next week feeling much better and try to enjoy it.

"It is disappointing that we have been relegated but the performance today has been to a similar level of recent weeks.

"We scored some good goals at the time but we also had a goalkeeper who made a couple of crucial saves and that helped us as well.

"They showed pride in wearing the jersey and they showed their own personal pride."