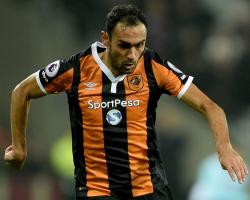 Hull climbed out of the bottom three of the Premier League for the first time since October and shoved Middlesbrough closer towards relegation with a thrilling 4-2 win at the KCOM Stadium.

Victory was the Tigers' fifth in six home league games and lifted them two points above Swansea, while Boro, without a league win since December 17, appear destined for a return to the Sky Bet Championship.

The Teessiders played their full part in a pulsating encounter, but are now seven points adrift of safety with eight games remaining.

Hull thought they had drawn first blood, but Niasse was deemed offside when he turned the ball home at the end of a slick move in the third minute and the first blow was landed by Boro two minutes later.

It was the Spaniard's first goal since the end of January and only the visitors' second in seven league matches.

The Tigers responded well with Kamil Grosicki volleying inches over the crossbar before they equalised in the 14th minute through Markovic, who slammed the ball home from close range after the visitors had failed to clear Niasse's flick-on from Andrew Robertson's cross.

A rip-roaring start to the game suggested more goals were in the offing and Hull turned the game on its head in the 27th minute.

Traore and Negredo combined again as Boro swarmed back on to the offensive and the latter's shot on the turn was kept out by Hull keeper Eldin Jakupovic before the home side swept into a 3-1 lead.

Maguire's diagonal ball was crossed first time by Grosicki from the right and with Valdes stranded, Hernandez steered home his fourth league goal of the season.

But Boro refused to surrender

With nothing to lose the Teessiders pushed men forward and they were soon creating further chances.

Rudy Gestede's header from Stewart Downing's cross forced Jakupovic into a brilliant reflex save and Negredo curled a left-footed effort a whisker wide.

Adam Clayton's corner was nodded on by Ben Gibson and with both De Roon and Traore clearly offside, the former headed home.

Referee Michael Oliver consulted with his assistant and to the disbelief of Hull's players and fans he allowed the goal to stand.

The second half began in the same frenetic style

Hull midfielder N'Diaye's angled drive was saved at full stretch by Valdes, but such were their exertions in the first periods, players on both sides were already looking tired.

Hull gave themselves some much-needed breathing space and restored their two-goal cushion in the 70th minute when Maguire stole in unmarked at the far post to head home Robertson's curling cross.

Maguire's emphatic finish, from a tight angle, appeared to take the wind from Boro's sails.

Niasse blazed an angled shot over the crossbar and although the visitors battled gamely until the end, their best efforts foundered on the edge of Hull's area as the home side held on for three more vital points.