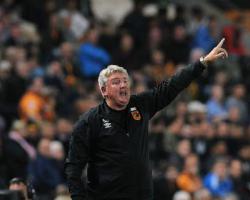 Hull 2-4 Man City: Match Report - view commentary, squad, and statistics of the game as it happened.Dzeko double cheers championsEdin Dzeko's wonderful double and Frank Lampard's fourth goal in three games sealed victory for Manchester City despite the champions at one stage surrendering a two-goal lead over Hull.City looked to have pocketed the points early on as Sergio Aguero and Dzeko both found the net inside 11 minutes, the Bosnian hitting a stunning strike from the edge of the penalty area.But Hull wrestled their way back into contention with a helping hand from B#32million centre-back Eliaquim Mangala.The Frenchman, so impressive on debut against Chelsea last weekend, headed a calamitous own-goal past Willy Cabellero - handed a Barclays Premier League debut ahead of the dropped Joe Hart - and then gave away a penalty with a reckless high tackle on Abel Hernandez.Hull's record signing converted the spot-kick and at half-time it was the hosts who seemed likelier winners.But Manuel Pellegrini's visiting side regained control after the interval and sealed victory through Dzeko's clinical finish and a trademark strike from the evergreen Lampard.For Pellegrini a first win in four league matches will be relief, but there was plenty of room for improvement.Gael Clichy was a near liability at left-back and the expensively assembled midfield pairing of Yaya Toure and Fernandinho was frequently cowed by B#3.5million man Mohamed Diame.The game began at a furious pace, Aguero charging at goal and testing Allan McGregor at the near post with just 40 seconds on the clock.Hull wasted little time making inroads of their own, Jake Livermore sending a devilish cross into the six-yard box where Nikica Jelavic just failed to make contact having slipped between Vincent Kompany and Mangala.It took just seven minutes for the opener to arrive, Hull having twice failed to get the ball clear

They left Aguero criminally unmarked as Pablo Zabaleta battled hard to head back into the danger zone.Aguero needed just one touch to shoot across McGregor and into the corner.Four minutes later Dzeko lashed in the second, collecting David Silva's pass and turning Liam Rosenior before expertly finding the top corner.Although early, it looked to be game over, as minds immediately turned to the visitors' 7-0 thrashing of Sheffield Wednesday and whether it could be repeated.But Hull's response was emphatic.Clichy, notionally supported by Silva, was an obvious target and was exposed as the hosts hit back in the 21st minute.Ahmed Elmohamady linked well with Rosenior before the latter breezed past Clichy and crossed from the right.There were plenty of blue shirts on hand but the first, Mangala, lost his bearings completely as he sent an unstoppable header arrowing into his own net.Aguero nearly dampened the celebrations when he went straight up the pitch and slotted an inch or two wide on the counter but Hull were not finished either.Diame began to boss the midfield, Toure and Fernandinho dropping deeper and deeper, while Elmohamady and Rosenior continued their assault on Clichy.The reward came in the 32nd minute, Diame chipping to Hernandez only for the striker to be taken out by Mangala's wild high-footed challenge.The Uruguayan sent Caballero the wrong way and the champions were glad to hear the half-time whistle.But the balance shifted again soon after the restart, Toure clattering the post from long distance.Pellegrini's men were back on the front foot, Silva re-emerging after a quiet period and Aguero always nagging.But with the scores still tied the ineffective Fernandinho gave way for Jesus Navas for the last 25 minutes.It was a risky switch that left Manchester City light on ball-winners but they regained the lead in a matter of minutes.Silva was the driver, cutting inside and riding Diame's challenge before freeing Dzeko on the left.The striker finished clinically, sliding his shot past the outstretched McGregor and in at the far post.Hull had not given up, Gaston Ramirez working Caballero after stepping off the bench alongside Hatem Ben Arfa, and Tom Huddlestone seeing his 20-yard drive loop up off Kompany and over the crossbar.But there was just enough time for Lampard to add to his remarkable scoring sequence, arriving with a typical late run to convert Zabaleta's cut-back