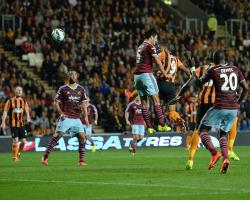 Hull 2-2 West Ham: Match Report - view commentary, squad, and statistics of the game as it happened.Hull held by HammersDebut goals from Hull pair Abel Hernandez and Mohamed Diame were only good enough for a draw against West Ham as a Curtis Davies own-goal ensured the spoils were shared in a breathless encounter at the KC Stadium.The home side lost the lead twice, club record signing Hernandez getting the ball rolling with an impeccable first-half header and Diame restoring the advantage against the side he left on transfer deadline day.In between Enner Valencia had marked his first league start with a blockbuster strike from 25 yards and the 2-2 draw was settled when Diafra Sakho's modest shot evaded Allan McGregor, only for Davies to bundle over his own line.Valencia almost won it in added time when his header rebounded off Dawson's shoulder and rattled the crossbar, but that might have been harsh on the home side.Hull can be particularly pleased with the contribution of Hernandez, who also clattered the woodwork in a display that looked a good down payment on the B#9.5million sent Palermo's way, while Diame was desperate to impress against his former employers.West Ham, meanwhile, can rightly be enthused by the forward pairing of Diafra and Valencia, who showed real understanding on their first outing together.It was, in many ways, a shame for the match to be settled by the messiest goal in four, and McGregor in particular will be aggrieved having made two fine saves in the match.The game got off to a lively start, both sides tearing around without taking a breath in the opening minutes.There was more energy than genuine craft in those early exchanges but Diame enjoyed a satisfying moment, taking the ball round his former captain Mark Noble with a deft touch and winning a first ovation from his new fans.Hull came close to making significant breakaways on a couple of occasions, notably when Hernandez's clever back-heel for Nikica Jelavic almost saw the Croatian in behind the away defence, while Jake Livermore wasted a fine chance to counter with a mis-hit pass.Sakho and Valencia were showing signs of life at the other end of the pitch and the the former must have thought he had opened the scoring in the 35th minute.Valencia won a back-post header to send Stewart Downing's cross back across goal and a bundled finish off Sakho's chest was goalbound until McGregor thrust a glove to his left to make a superb reaction save.Just four minutes later the hosts were ahead.Livermore and Ahmed Elmohamady outmanned Aaron Cresswell on the right wing before the Egyptian swung in a cross

Hernandez was the target and he brushed off the attention of James Tomkins to pick out the bottom corner with a wonderful header.It was a ruthless finish from the 24-year-old, who nearly went one better just before the break.Having been fed by Andy Robertson, he took a single touch on the edge of the box before thudding the crossbar with a piledriver.Jelavic headed home the rebound but came from an offside position.If the Hammers were glad to hear the half-time whistle it barely showed after the restart.They were on the front foot immediately and levelled in the 50th minute courtesy of Valencia's stunner.He picked the ball up in relatively safe territory, but Dawson's refusal to close him down allowed the striker to shuffle into range, before crashing home an unstoppable effort.For all the brilliance of the first two goals, the next two were down in large part to defensive error.With 64 minutes gone Cresswell's loose throw-in was stolen by Diame, who picked Cheikou Kouyate's pocket, bore down on goal and finished nonchalantly off the inside of the post.This time Hull's lead lasted less than three minutes and was surrendered in the tamest of fashions.Sakho did well to find space in behind the defence but, having collected Downing's pass, his low shot was a tame affair.But McGregor failed completely to get a hand on it and the last line of defence, Davies, only succeeded in finishing's Sakho's job for him.McGregor was partially redeemed when he pawed Sakho's header out from under the crossbar, but Hull's attempts to push for the win - in the shape of two more debutants, Gaston Ramirez and Hatem Ben Arfa - came to nothing.Instead the Hammers almost stole it, Valencia's header coming off Dawson and hitting the bar