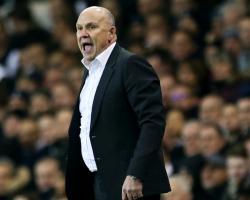 The Everton midfielder has struggled to produce his best form this season but rescued a 2-2 draw for his side in the 84th minute after Robert Snodgrass's second-half free-kick had threatened to win the game for Hull.

Both sides hit the woodwork after Tigers goalkeeper David Marshall's own goal had cancelled out Michael Dawson's first-half opener for Hull - and although Mike Phelan's side moved off the bottom of the table, they have now gone nine games without a league win.

Hull burst out of the blocks with Snodgrass curling a shot wide and Everton skipper Phil Jagielka turning Ahmed Elmohamady's excellent ball over his own crossbar before Dawson gave his side a sixth-minute lead.

Snodgrass's corner was flicked on by Harry Maguire and the centre-half finished in style, burying a first-time shot inside Joel Robles' left-hand post for his fourth goal of the season.

Kevin Mirallas' shot was blocked by Marshall and Seamus Coleman headed Gareth Barry's cross against the foot of a post.

Everton warmed to the task in front of Southgate, threatening again through long-range efforts from Barkley and Barry.

But the Tigers defended resolutely, determined not to let slip their advantage having conceded the first goal in 15 of their previous 18 league games this season.

That was typified by Curtis Davies' last-gasp tackle to deny Romelu Lukaku in the box - but then Everton were gifted an equaliser in first-half stoppage time.

Mirallas swung over a corner and Marshall, under pressure at his near post, mistimed his punched clearance and the ball flew off the back of his fist and into his own net.

The goalkeeper was quick to make amends at the start of the second half, pulling off a brilliant save to push Lukaku's deflected shot on to the crossbar.

Barkley fired straight at Marshall after racing on to Lukaku's flick on, then Snodgrass curled a trademark free-kick against the crossbar with Robles beaten in the 55th minute.

Robles then blocked Dawson's shot and a finely-balanced game then turned in Hull's favour thanks to another piece of dead-ball brilliance from Snodgrass 10 minutes later.

Leighton Baines was penalised for his clumsy challenge on Maguire and from similar distance Snodgrass struck another beauty, this time inside Robles' right-hand post to give Hull the lead.

But as the home side appeared to be heading for a rare win, Everton refused to surrender

Baines found space on the left after another foray forward and his cross was headed emphatically home by Barkley at the far post.

Dieumerci Mbokani fired wide in the closing stages for Hull, who are still waiting for a first league win since November 6.