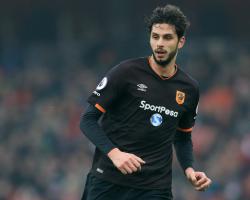 Oumar Niasse stepped off the substitutes' bench to score twice as Hull gave their Premier League survival hopes a major boost with a 2-1 home win against relegation rivals Swansea.

Hull were struggling to make headway in the second period when head coach Marco Silva played a master-stroke by sending on Niasse in the 63rd minute and the Senegalese striker responded with two crucial goals in the space of 11 minutes.

Alfie Mawson ensured a nervous finish for the Tigers when he headed home in stoppage time for Swansea, but Silva's side held on to clinch their third league win under the Portuguese and climb to within one point from safety with 10 games remaining

Swansea made the brighter start and went close in the 11th minute when Wayne Routledge darted on to Gylfi Sigurdsson's clever pass into the box, but his low angled shot struck the legs of Hull goalkeeper Eldin Jakupovic.

Tom Huddlestone's low effort at the other end barely troubled Swansea goalkeeper Lukasz Fabianski and Hull defender Andy Robertson was next to avert the danger in his area by hacking clear as the visitors threatened again through Tom Carroll.

Hull's jitters were characterised by centre-half Harry Maguire's glaringly mis-placed pass, which was pounced on by Sigurdsson before he was crowded out in the area by a scrambling defence.

Right-back Rangel was replaced by Jordi Amat in the 33rd minute and dangerman Llorente, who had scored 10 goals in his last 15 league games, was forced off with a thigh injury.

In between, Hull had finally warmed to the task, going closest through Kamil Grosicki whose lob was acrobatically punched clear by Fabianski.

Huddlestone's low shot early in the second half was comfortably gathered by Fabianski as Hull showed more urgency, but the home side were given a huge let-off in the 54th minute.

Carroll's low cross was pushed into Routledge's path by the sprawling Jakupovic inside the area, but the Swans winger blazed a left-footed shot over the crossbar from seven yards when he should have put the Welsh club ahead.

Jakupovic then turned away Sigurdsson's curling free-kick and with the game hanging in the balance, Silva sent on Niasse for the ineffective N'Diaye.

Six minutes late the Tigers stole into the lead

Maurauding right-back Omar Elabdellaoui broke clear and from his pass inside, Abel Hernandez flicked the ball on first time for Niasse to run on and steer a low shot beyond Fabianski.

Sigurdsson fired off target as Swansea tried to respond, but the visitors found themselves 2-0 down in the 78th minute.

Ahmed Elmohamady helped the ball on to Niasse in the area and the Senegalese lashed home a bouncing ball to all but seal the points.

Niasse pulled another effort wide when he appeared set for his hat-trick before the visitors ensured an anxious finale when Mawson headed home Sigurdsson's cross in stoppage time, but the Tigers held on.