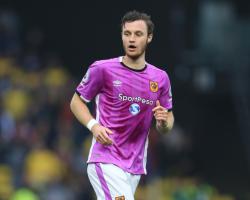 Hull finally enjoyed the winning feeling again as they ended a six-game losing streak in the Premier League with a 2-1 success over Southampton.

The Tigers had endured a wretched run that left them without a win since August but goals from Robert Snodgrass and Michael Dawson in the space of two second-half minutes stopped the rot and gave boss Mike Phelan a first three points since being named permanent manager.

Whether the win was deserved is another matter, as Southampton controlled the majority of the game and Hull's goals came from their only two shots on target, but it was enough to see them draw level on points with 17th-placed West Brom.

Saints boss Claude Puel will be left scratching his head at just how they lost this game as they were 1-0 up and cruising thanks to Charlie Austin's early penalty before being hit by Hull's two-punch combination, while they also laid siege to Hull's goal late on

The striker's chances of a call-up would have been even further enhanced had he managed to convert three late opportunities to rescue a point.

Maya Yoshida burst into the box and was wiped out by Curtis Davies, with Austin converting coolly from the spot.

Hull's plight was not helped by suffering more injury woe as they lost front two Abel Hernandez and Will Keane to injury inside the opening 20 minutes and it severely restricted their creativity, with Fraser Forster not tested at all in the opening 45 minutes.

Instead, it was Southampton who continued to dominate and pushed for a second, but Tigers goalkeeper David Marshall made good saves to deny Jordy Clasie twice and then Austin again.

The start of the second half saw no let-up in the away pressure and Virgil van Dijk headed on to the top of the crossbar from a corner as Southampton searched for a decisive second.

Yet, despite being in total control, somehow Southampton found themselves losing just after the hour as Hull hit them with a two-goal salvo in the space of two minutes.

Snodgrass drew them level in the 61st minute when he fired home from 12 yards after good work down the left by Sam Clucas.

And then Snodgrass turned provider immediately afterwards as he delivered an inviting free-kick which Dawson headed past a helpless Forster.

Suddenly Southampton found themselves chasing the game and they came close to levelling when Austin found space on the edge of the area, but his low drive was met by the firm hand of Marshall.

Austin had further efforts - another saved by Marshall and one blocked by Dawson - but this was not to be Southampton's day as Hull held on for a rare win.