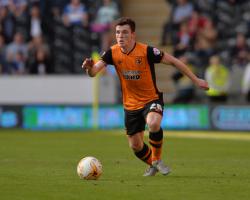 Gareth McAuley's 34th-minute opener looked set to send the Tigers sliding to another defeat on a cold and misty afternoon in East Yorkshire until Dawson got the finishing touches to a long-range Robert Snodgrass free-kick, earning a 1-1 draw.

The home side had failed to muster a single shot of any description in the opening 50 minutes and the Baggies looked in little danger of having their surge into the top half of the table halted.

In truth a match that had promised little threatened to deliver even less in a low-key opening half hour in which the solitary chance for either side saw James Morrison miscue a cross from Craig Dawson in the Tigers box.

The Baggies dominated possession but struggled to break through a home back line which was looking more resolute than the Burnley side past whom Tony Pulis' men had hit four last Monday.

The visitors deserved their opening goal in the 34th minute when Hull failed to deal with a Matt Phillips corner from the right and McAuley was on hand to head past helpless Hull keeper David Marshall.

The below-par first period ended with boos ringing around the KCOM Stadium from the home supporters who had witnessed precious little positivity from their team.

But the half-time introduction of Adama Diomande injected more urgency into the Tigers front line and they had their best chance one minute after the break when Curtis Davies flashed a Robert Snodgrass corner across the face of goal.

Snodgrass' long-range effort in the 50th minute, which was saved by Ben Foster, drew ironic cheers from the home fans, and moments later Jake Livermore screwed a shot wide.

It was suddenly looking much more positive from Hull who came close again when Markus Henriksen threaded a low ball into the box for Livermore, who hit a shot straight at Foster.

The Tigers grabbed the equaliser their second-half performance just about deserved when Dawson converted after being set up by Dieumerci Mbokani's downward header in the box.

Nacer Chadli replaced Morrison late on and his first act was to strike a long-range free-kick which the alert Marshall did well to push around his right-hand post.

And the visitors could have snatched the points in injury time when substitute James McClean sent in a cross from the right and Salomon Rondon headed wide from in front of goal.