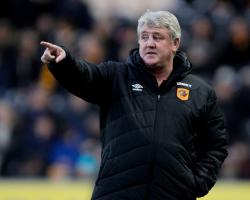 Bruce and Poyet go head to headSteve Bruce and Gus Poyet were involved in a furious touchline exchange as relegation rivals Hull and Sunderland drew a bitter encounter 1-1.Black Cats boss Poyet was sent to the stands in the first half after protesting a decision to book Jack Rodwell for diving but took a 10-yard detour to confront his opposite number.The pair exchanged angry words and sarcastic gestures, leaving Bruce apoplectic and physically restrained by assistant referee Stuart Burt as he lunged toward the Uruguayan.The incident was the biggest flashpoint on an ugly night at the KC Stadium, which also took in chants in support of suspended Sunderland winger Adam Johnson and a litany of nasty challenges.Only rarely did a game of football threaten to break out amidst the ill-feeling, with Dame N'Doye producing a rare moment of class with a wonderful improvised opener and Rodwell equalising with a point-blank header in the 77th minute.In a pre-match interview, Poyet had told broadcasters: "always something happens against Hull, so I am looking forward to a normal game".Witnesses could use many words to describe proceedings here, but 'normal' would not be one of them.Almost as soon as the game began a vocal section of the Sunderland contingent struck up a chorus of "there's only one Adam Johnson".The England international has been released on bail after he was arrested on suspicion of sexual activity with a girl under 16, and has been suspended by the Black Cats pending the outcome of a police investigation.The Hull support responded with their own take on events, but neither group came off well from the ill-advised exchange of songs.When all eyes belatedly returned to the field, Hull were comfortably on top.Nikica Jelavic blazed the first decent opportunity wide after some sleepy defending and man-of-the-match Andy Robertson was quickly finding his stride on the left.Wes Brown, reprieved on appeal from his weekend red card, was correctly identified for a 12th-minute foul on Ahmed Elmohamady and Hull scored from the resulting free-kick.Tom Huddlestone's delivery was low, hard and begging to be finished.Alex Bruce would surely have obliged but N'Doye beat him to it, dragging the ball off his instep with his back to goal and flicking it deftly into the bottom corner.It was a memorable moment from the striker, who is fast becoming one the bargains of the January window with three goals in as many starts.But the real talking point was still to come.Rodwell was racing towards goal in a rare Sunderland attack when Alex Bruce raised a foot at the bouncing ball.There may have been contact but it was not enough to concern Rodwell until he reached the edge of the box and promptly collapsed.Mike Dean immediately booked the midfielder for diving, driving Poyet to distraction.Having argued too long he was sent to the stands only to stride off in search of the Hull boss.A handshake was offered and declined, words exchanged and a sarcastic round of applause given by the Uruguayan.Something sent Bruce into a rage and he attempted to charge at Poyet before being restrained by Burt.It was a regrettable episode and one that is likely to warrant further attention.Liam Bridcutt ensured hostilities continued in the second period, waiting just seconds before a nasty tackle on Jelavic.He was only cautioned, perhaps leniently, as Paul McShane had been for a bad challenge on Jermain Defoe.There were even moments of genuine football, with John O'Shea involved at both ends.First he cleared away from an open goal after N'Doye's clever touch took out Costel Pantilimon, then he saw a headed effort sneak just wide.But Lee Cattermole was on hand to drag the game back into the gutter with a petulant clip of David Meyler's heels

Within moments he was substituted.Hull, who had won their last four games against Sunderland, should have finished things from a lightning counter-attack but Jake Livermore shot straight at Pantilimon after a lung-busting sprint.Sunderland levelled with 13 minutes to play, substitute Patrick van Aanholt's cross swirling over Allan McGregor and towards the top corner when Rodwell made sure from a less than a yard.Hull might have taken all three points but N'Doye's close-range header was brilliantly kept out by Pantilimon