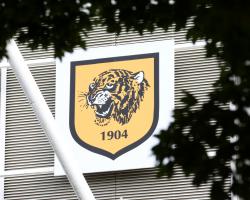 Michael Keane was transformed from villain to hero as he rescued a point for Burnley, who are still without a Premier League win on the road this season after a 1-1 draw at relegation battlers Hull.

The Clarets defender smashed home a second-half equaliser minutes after his handball had gifted Hull a penalty, which Tom Huddlestone converted.

The point was not enough to lift the Tigers out of the bottom three following Crystal Palace's win against Middlesbrough, while Burnley, who had Ashley Barnes sent off in the closing stages, climbed one place to 10th despite registering only two points on their travels from 12 games in the top flight.

Former Hull pair George Boyd and Robbie Brady both featured in the opening stages for Burnley.

Boyd tested Hull goalkeeper Eldin Jakupovic with a low shot, while Brady's dangerous cross was cut out at the near post by Harry Maguire.

Both sides probed, but neither was able to assert control

Brady, sold by Hull to Norwich for B#7million in 2015, dragged an angled shot wide and his 38th-minute free-kick almost led to the first goal when Ben Mee's header was pushed on to the crossbar by Jakupovic.

Grosicki curled a free-kick narrowly off target and then crossed for Elmohamady to head just wide as an underwhelming first half came to an end.

Hull attacked with more purpose after the restart and Mbokani should have done better with his headed effort from Andy Robertson's cross.

The second period was markedly more entertaining as the two sides chased a game that was there for the taking.

Grosicki saw another shot deflected and from the resulting corner Keane, under pressure from Maguire, clearly handled the ball and referee Martin Atkinson did not hesitate in pointing to the spot.

Barnes was booked for dissent and Huddlestone's low right-footed penalty squeezed inside Heaton's right-hand post to edge Hull ahead in the 72nd minute, much to the fury of the Burnley keeper, who got a hand to the ball but failed to keep it out.

Burnley were not behind for long though and Keane quickly redeemed himself.

Brady's deep corner curled straight at the Clarets defender and with the poise of a natural finisher, he chested the ball down and drilled home a fine equaliser in the 76th minute.

Hull substitute Abel Hernandez headed wide soon after replacing Elabdellaoui and curled a shot wide in stoppage time, but neither side carved out a clear-cut chance to snatch victory, while Barnes was sent off in the second minute of time added on for his second yellow card.