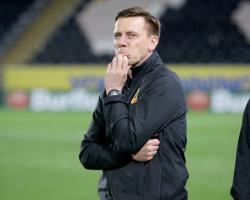 Pennock had been in the role since November when promoted from his post as Tigers' academy manager to join previous boss Mike Phelan's coaching staff.

Phelan was sacked on January 3, less than three months after being made permanent head coach.

"We can now confirm that first-team coach Tony Pennock has left the club," Hull said on their official website

"Although offered the opportunity to return to his original position as academy manager to continue the excellent work already undertaken with the club's young players, Pennock has chosen to move on and seek a fresh challenge."

Pennock joined the club as academy manager in February 2014 and was replaced by Jon Beale when he moved up to work alongside Phelan.

The Tigers have confirmed that Beale will continue in the role.