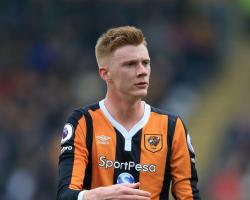 The Tigers hauled themselves out of the drop zone for the first time in over five months by beating relegation rivals Middlesbrough 4-2 on Wednesday, and Clucas said "togetherness" had been their watchword.

"We've got great team spirit," Clucas told the club's official website after a thrilling encounter at the KCOM Stadium that saw Hull come back from behind for the second time in five days.

"The players on the bench who come on are really fighting for their shirt and that's brilliant at this time of the season.

"One word we picked out before the game, and I think the gaffer wrote it on the board, was 'togetherness' and we've really got that going into the games and you can see that when we go behind."

Middlesbrough, who stayed second from bottom as their winless league run extended to 13 matches, took an early lead through Alvaro Negredo, but the Tigers stormed back with goals from Lazar Markovic, Oumar Niasse and Abel Hernandez.

"It's massive," added Clucas, whose enterprise in midfield has helped ease the loss of Tom Huddlestone, who sat out the second game of a three-match ban

"They were two we could possibly get six points from, we've got good form at home, because w e've got a tough fixture away at Man City on Saturday and we've managed to do that

Boro's head coach Steve Agnew, still chasing his first win in charge after taking over from the sacked Aitor Karanka three games ago, had urged his side to take the game to their opponents at the KCOM

Centre-half Ben Gibson accepted his share of the blame, but said the fight for survival was far from over

"We're used to being solid, and we weren't," he told the club's official website

"I'll hold my hands up, I've got to do better for some of the goals

"We tried to be more expansive and creative up the pitch, and changed the shape

But ultimately, we didn't do our jobs defensively and without the ball, and we have to resolve that quickly.

"It's about the team and we won't stop fighting

There's eight games and 24 points still to fight for

"It was a big blow at Hull, but we have to get on with it quickly

It's a massive game against Burnley (at the Riverside on Saturday) now.