Silva makes winning start thanks to Hernandez and Tymon 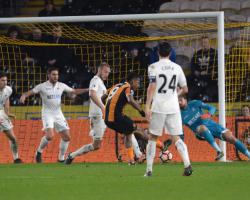 Substitute Hernandez marked his first appearance since being sidelined by a hamstring injury in early November with a 78th-minute opener and teenager Tymon clinched a 2-0 win by scoring his first senior goal with virtually the last kick, a minute after stepping off the bench.

Former Sporting Lisbon and Olympiacos head coach Silva, appointed as Mike Phelan's replacement on Thursday, was rewarded by three of his substitutes - Shaun Maloney assisted both goals - while Paul Clement's first game in charge of Swansea ended in defeat

Both Silva and Clement face an uphill task if they are to turn around the fortunes of their respective clubs.

The game was played out in front of a paltry crowd of 6,608 due to a pre-planned boycott by Hull fans in protest against club owners the Allam family.

But the two sides who prop up the Premier League contributed to an absorbing cup tie.

Eldin Jakupovic, the Tigers' EFL Cup penalty shoot-out hero against Newcastle in November and back in goal in place of David Marshall, kept out Swansea's best chance before the break when he brilliantly blocked Ki Sung-yueng's volley following Borja Baston's flick-on.

Hull went closest through Clucas in the first period when his well-struck volley was kept out in similar fashion by Swansea goalkeeper Kristoffer Nordfeldt, who started in place of Lukasz Fabianski.

Swansea skipper Jack Cork's timely block soon after the restart prevented Clucas from giving Hull the lead and Jakupovic was quick off his line to deny Ki in the penalty area before Leroy Fer fired wide soon after.

Jakupovic's superb full-length save kept out Nathan Dyer's effort, but then Hull enjoyed their best spell just before the hour mark

Snodgrass, for whom the club turned down a ÃÂ£3million bid from West Ham on Friday, headed powerfully over the crossbar and then curled a shot just wide after being played in by Markus Henriksen

Hernandez generated the biggest cheer of the afternoon when he replaced Henriksen in the 63rd minute, but H ull were dealt a blow when skipper Michael Dawson was forced off - fellow central defenders Harry Maguire and Curtis Davies both missed the game through injury

Ki's brilliant shot on the turn forced Jakupovic into another superb save as the goalkeeper pushed the ball on to a post, but the home side broke the deadlock through Hernandez in the 78th minute

Maloney, who had replaced Dawson, did well to cut the ball back from the by-line and Hernandez swooped to turn the ball home from six yards

Swansea went close to equalising when substitute Fernando Llorente's header from Sigurdsson's cross was superbly saved again by Jakupovic, but 17-year-old Tymon had the final word, racing into the area from the left to fire a thumping low shot beyond Nordfeldt and in off a post