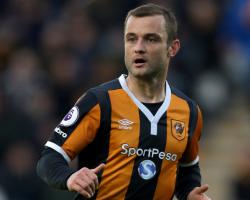 The Tigers announced their retained list on Wednesday and confirmed that there is an offer on the table for Scottish winger Maloney, 34, to stay on next season.

A club statement read: "Shaun Maloney, who is set to see his current contract expire at the end of next month, has been offered a new deal for next season, as have youngsters Jonathan Edwards and Harvey Rodgers who both spent the second half of the 2016/17 campaign on loan at Accrington Stanley."

Maloney originally penned a two-year deal with Hull in 2015 after a spell in Major League Soccer and he featured in 14 games for the club last term.

One player who will not be kept on is defender Alex Bruce, who is leaving after five years with the club.

Bruce, the son of former Tigers manager Steve, won two promotions and made 104 appearances for Hull, though the last of those came over a year ago.

He had already confirmed his departure was imminent earlier this week, writing on Twitter: "they were 4 great years the injury has made this season a tough one but I'm looking forward to next season wherever that may be".