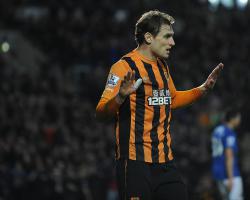 Gaston Ramirez and Sone Aluko could both be back in contention after making quicker than expected progress from their respective complaints.

But both Nikica Jelavic and Abel Hernandez face being ruled out for up to six weeks after pulling up with problems in Saturday's 1-0 defeat at West Brom.

The Tigers' second straight loss saw them dumped back in the relegation zone and Bruce can ill afford the absence of so many of his key players.

Ramirez had initially been expected to be ruled out for six weeks after picking up a groin problem against Everton at New Year's Day while Aluko missed the West Brom loss with a calf injury.

Scans have shown Jelavic suffered no serious damage to his knee at The Hawthorns but will still be ruled out until at least the end of January, while Hernandez has a small tear in his adductor muscle.

Meanwhile, Mohamed Diame is set to step up his recovery from a knee injury sustained in the 1-1 draw at Everton at the start of December, but an estimated return date is yet to be determined.