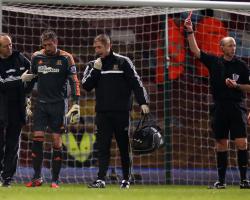 McGregor is set to be ruled out for the rest of the season with kidney damage following a clash with Mohamed Diame in the first half at Upton Park which also saw him red-carded by referee Mike Dean.

The Football Association reversed the verdict late on Friday, saying in a statement: "Hull City's Allan McGregor has had his claim for wrongful dismissal upheld following an independent regulatory commission hearing today.

"McGregor was dismissed for denying a goal scoring opportunity during the game against West Ham United on 26 March 2014.

"The player's standard punishment, therefore, has been withdrawn with immediate effect."

But the decision will come too late for Bruce, who believes McGregor's dismissal cost his side the chance of claiming the victory which he believes would have all but secured top-flight survival.

Speaking at a press conference prior to the news of the successful appeal, Bruce admitted he has been left frustrated after a campaign he claims has been blighted by refereeing inconsistencies.

"I will speak to (referees' chief) Mike Riley again but I seem to have called him more this year than I have in my whole career," he said.

"It is happening on too many big occasions

It has cost us at Tottenham, Swansea and West Ham and that for me is far too many.

"I know it's a difficult job but we have to improve it and for me a bit of common sense has got to come back into it.

"I think referees are put under too much pressure

They can't seem to referee like they used to - with a bit of common sense - and that's the disappointing thing for me."

Steve Harper will return to the starting line-up in place of McGregor, who is expected to remain in the high dependency unit of a London hospital for at least another four days.

Bruce added: "I went to see Allan yesterday and the kid is still in a lot of pain.

"Overnight the observations have been better but it certainly looks like he is going to miss the rest of the season.

"Allan is as brave as they come but he has taken a horrible knock to his kidneys and badly damaged one of them.

"We expect Allan to stay in the high dependency unit for another three or four days, then three or four more days in a normal ward."

Bruce has recalled Eldin Jakupovic from his loan spell at Leyton Orient and the Swiss is expected to understudy Harper at Stoke on Saturday.