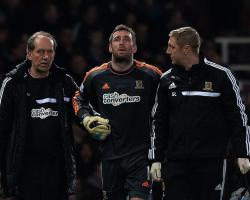 McGregor is currently recovering in the high dependency unit of a London hospital where he is expected to spend at least another week.

The Scot was controversially sent off after a clash with Mohamed Diame in the first half of the Barclays Premier League clash.

Hull boss Steve Bruce said: "I went to see Allan yesterday and the kid is still in a lot of pain.

"Overnight the observations have been better but it certainly looks like he is going to miss the rest of the season.

"Allan is as brave as they come but he has taken a horrible knock to his kidneys and badly damaged one of them.

"We expect Allan to stay in the high dependency unit for another three or four days, then three or four more days in a normal ward.

"The result pales into insignificance when someone like that is going through that kind of injury."

Former Newcastle veteran Steve Harper is set to deputise for McGregor for Saturday's trip to Stoke, while Eldin Jakupovic has been recalled from his loan spell at Leyton Orient to provide cover.