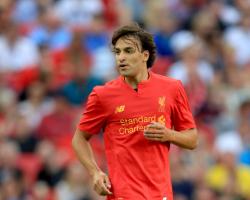 The Serbia international's year-long deal with the Portuguese club was ended early after mutual agreement between them, the player and the Reds and the Merseysiders subsequently confirmed he had immediately joined the Premier League strugglers.

Markovic, a ÃÂ£20million signing by former Liverpool manager Brendan Rodgers in the summer of 2014, made just 11 appearances for Sporting but last played on December 7 and has featured in just one match-day squad in seven subsequent games

He spent last season on an equally disappointing loan at Fenerbahce, which was cut short by injury, having failed to make the grade at Anfield.

Markovic was given a chance to impress Jurgen Klopp in pre-season but the German made a decision early on the 22-year-old was not part of his plans.