Marco Silvas exit from Hull close to being announced 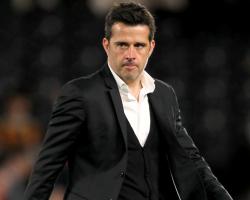 Silva failed to stave off the club's immediate return to the Sky Bet Championship after signing a short-term deal in January until the end of the season.

The Portuguese met the club's owners on Wednesday night and Press Association Sport understands the 39-year-old has told them of his decision to leave.

The news is a bitter blow to Tigers' fans, who made it clear they wanted him to stay during and after Sunday's 7-1 rout by Tottenham at the KCOM Stadium

Silva was also reported to have held talks with Porto on Tuesday after the Portuguese club parted company with Nuno earlier in the week.

But bookmakers have now installed Silva as favourite to succeed Sam Allardyce at Crystal Palace, while he has also been linked with the vacancy at Watford and with Southampton.

Hull's relegation straight back to the second tier was confirmed following their 4-0 defeat at Crystal Palace 11 days ago.

But despite their final-day capitulation against Tottenham, chants for Silva to stay rang loud throughout the match.

Few had heard of the former Sporting Lisbon and Olympiakos boss in the UK when he replaced the sacked Mike Phelan in January and took on mission impossible.

Hull sat bottom of the table, three points from safety, after winning only three of their 20 Premier League games and Silva said on his arrival it would take a "miracle" to keep them up.

The Tigers won only one league game on the road this season, but Silva transformed the mood on the terraces from despair into genuine belief after a run of six wins from seven unbeaten home games in April lifted them two points clear of the bottom three.

Those fans who had stayed away from the KCOM in protest against the club's owners had returned in large numbers as their side gathered momentum.

But uncertainty over the club's ownership remains - the Allam family put the club up for sale in April 2014 after they had failed to rebrand as 'Hull Tigers'.

Former manager Steve Bruce quit in the summer over a lack of adequate investment in the playing squad, which left caretaker boss Phelan with just 13 fit senior players for the opening-day win against Leicester.

Silva, though, lifted the gloom

His side won only one of their remaining seven games and took one point from their last four, but the head coach had already enhanced his reputation.

Victory against Watford at the KCOM on April 22 extended his unbeaten home record as manager at four different clubs to 41 games.

But that run was halted at the worst possible time in their next game at the KCOM by already-relegated Sunderland and the Tigers went on to concede 11 goals in their last two matches.

The Tigers are now set to be in the hunt for their fourth manager in less than 12 months following the departures of Bruce, Phelan and Silva.