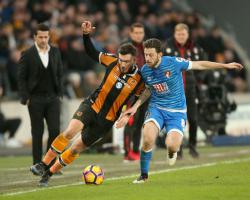 Snodgrass, 29, is expected to join Premier League rivals West Ham, with whom he is currently in talks after the two clubs agreed a reported ÃÂ£10million deal on Thursday.

Hull also accepted a similar offer from Burnley for the Scotland international, while Middlesbrough were also reported to have made a formal bid.

"There's nothing official at the moment," Silva told a press conference before Sunday's FA Cup fourth-round tie at Fulham

"And as I told you, he hasn't trained with the team for the last 12 days and hasn't been available to play.

"The player, when he talked with me and with the club, said he wanted to leave.

"He made it clear to our chairman that he didn't want to stay at Hull City and the view is not with me, it's with our chairman to see if it's possible or not."

Snodgrass has been relegation-threatened Hull's outstanding player this season, scoring nine goals in all competitions, including spectacular free-kicks against Burnley and Everton.

"The player did not have one problem with me ," Silva added

"When he was available he tried to work and do his best, but for the last 12 days he hasn't worked with me

"When it is official, we need to find a solution to replace the player.

"Until now he's been a really important player for us

When it's official we'll talk more about the situation and I will give you my opinion."

They have won their last three home matches.

The Tigers' 2-1 victory was not enough to book a date at Wembley as they went down 3-2 on aggregate, but it halted United's 17-game unbeaten run and was even more impressive against a backdrop of distractions.

Silva, who made seven changes, was without club record signing Ryan Mason, who is recovering in hospital after fracturing his skull in last Sunday's defeat at Chelsea.

The Portuguese coach is braced for further offers for several other members of his squad, while insisting he is working tirelessly to fill the gaps in his bid to keep the Tigers in the top flight.

He said he expected to miss out on one of his targets, Genk winger Leon Bailey, who is understood to be poised to complete a move to German side Bayer Leverkusen.

But the Tigers have yet to receive any official bids for striker Abel Hernandez, recently linked with both West Brom and Chinese Super League side Changchun Yatai.

"We haven't received any bids for Abel," Silva added

"I don't know this news

There's nothing official and of course he's an important player for me and the club."

Silva confirmed he will be selecting from an unchanged squad for the cup-tie at Craven Cottage but will be resting several players.