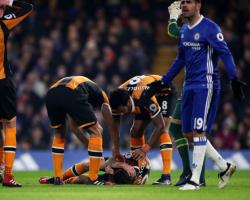 Midfielder Mason is currently making "excellent progress" in St Mary's Hospital in London after surgery on Sunday night to repair his fractured skull, sustained during Hull's defeat at Chelsea earlier in the day.

The Tigers take a break from their top-flight survival battle on Thursday when they bid to overhaul a 2-0 deficit from the first leg of their EFL Cup semi-final against Manchester United.

But Silva said the club's main priority was to maintain its support of Mason and his family as the England international recovers from the damage caused by his clash of heads with Chelsea defender Gary Cahill.

"At this moment we need to forget everything," Silva told a press conference before United's visit to the KCOM Stadium.

"The most important is the player and his family, the other things are not important."

Hull return to London at the weekend for their FA Cup clash at Sky Bet Championship side Fulham and Silva said he would take the opportunity to visit Mason before Sunday's fourth-round tie.

After the game it's impossible for me because everything is fast," Silva said

"Our staff will be dealing with the players.

"It's not easy in this moment and the player has visitors, but sure on Saturday I will be there.

"It's important to support the player and his family, of course it's not an easy moment for us, the team

"But we need to be strong, to be together, to keep the players together and support Ryan - that's the most important (thing)."

Silva, 39, said it would require a "miracle" to keep Hull in the Premier League when he replaced Mike Phelan earlier this month.

His task appears to have been made even harder on Wednesday after the club accepted a bid of around ÃÂ£10million for star player Robert Snodgrass from Burnley.

West Ham had also been in the race to capture Snodgrass and it remains to be seen if they will come in with another offer having had earlier bids turned down.

But the Scotland international's tenure at the KCOM looks to be over and following last week's departure of midfielder Jake Livermore to West Brom for a similar fee, plus the loss of Mason, Silva must move quickly to bring in replacements before the transfer window closes.

"It's clear we need players in those positions," the Portuguese said

"When I came I had in my mind when I started training and started to analyse our games, I had one opinion.

"During these last four games some things have happened, some injuries also, and Jake has left and we need to pay attention to these situations also.

"We need to do our best in this window for these positions and for the other positions also."

Silva drafted in winger Lazar Markovic this week, on loan from Liverpool until the end of the season, and confirmed another winger, Genk's Leon Bailey, was also on his radar.

"We will try," Silva added

"He's not an easy player to get, but we will try