Long next on agenda for Hull 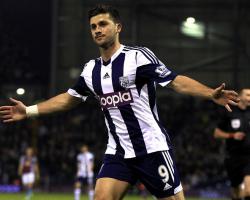 The Croatian striker has arrived at the KC Stadium in a club record ?7.5million deal but Hull manager Steve Bruce is also looking to move for Republic of Ireland forward Long.

Jelavic, 28, admitted that it did not take much persuading by Bruce to convince him to join, and the arrival of Long would do much to secure the top-flight status for a club that has established a good defensive record this season and is currently in 10th spot.

Jelavic, who has signed a three-and-a-half-year deal, is expected to make his debut in Saturday's match at Norwich and Long's move could also be sealed before then.

Jelavic said: "As soon as the manager called me, I realised straight away that he was really interested in signing me and that it is a great opportunity for me to come here.

"It is a good club, and we have a good squad. We talked a little bit, but it didn't take long to realise that it was right for me.

"It's a newly-promoted club, but I can see straight away that there is a lot of ambition here within the club and I hope that we can build on the great start to the season and become a really strong Premier League team over the coming years."

Jelavic played for Hajduk Split and Rapid Vienna before moving to Scotland where he played for Rangers, scoring 36 goals in 54 games. He then moved to Everton where he hit 21 goals in two years but has struggled to secure a starting place this season.

Hull said the fee was undisclosed, but it is understood to be ?6.5million rising to ?7.5million if they stay in the Premier League.

His signing comes against a backdrop of more strife at the club over owner Assem Allam's proposed name change to Hull Tigers.

Allam was accused of a "crude attempt at blackmail" by the Football Supporters' Federation (FSF) after he threatened to quit the club within 24 hours if his proposal does not receive FA approval.