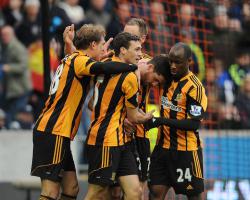 Long won the penalty which led to the Tigers' opener for Liam Rosenior then fired home the second himself to secure a 2-0 win over struggling West Brom.

The Ireland international had surprisingly been allowed to leave The Hawthorns in January when Bruce also brought in former Everton striker Nikica Jelavic.

Bruce said: "The two strikers came in at just the right time and have given the whole club a boost.

"We didn't play well today by any stretch of the imagination but if you have got that bit of quality at the top end of the pitch they can create something and they will always be a handful with the attitude they've got."

Long was barracked by the visiting Baggies fans for his part in the penalty incident, falling under the challenge of Craig Dawson in the box in what television replays suggested had been minimal contact.

Jelavic's penalty was saved by Baggies keeper Ben Foster but Rosenior was on hand to head home the rebound and and score his first senior goal since October 2009.

Bruce added: "Shane is never going to dive - he's as genuine as they come

But when you move as quickly as he does, you are going to go over with the slightest little tap

"It might be a soft penalty but Chris Foy is close and maybe he's seen and heard some contact."

West Brom boss Pepe Mel criticised the penalty decision and said he believed his side should have been awarded one in the second half when James Morrison fell under a challenge in the box.

The result leaves his side three points and two places above the drop zone and fighting to restore the feelgood factor generated by last week's win at Swansea.

Mel said: "I think it was a bad decision by the referee, and in the second half there was the same situation in the other box and the referee missed it."

Mel refused to blame Long for the penalty incident and insisted the defeat was not made any harder to take by the fact that a former player was so instrumental in his side's demise.

Mel added: "Shane Long is a good professional and he is a striker for Hull City.

Shane only wants the best for his team and I think it is normal.

There are now four teams beneath us and the next game is a big one for us."

While Mel faces a major challenge rousing his players for what promises to be a tight relegation run-in, Bruce is now convinced his side is within touching distance of safety with one more win likely to preserve top-flight status for at least another year.

Bruce said: "I've said all along I think 10 wins is going to be enough and now we have to do whatever it takes to see it through

We have still got a little bit to do and we certainly won't be taking anything for granted."