Jelavic happy to be heading to Hull 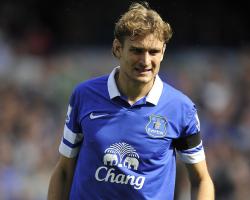 The two clubs agreed a fee for the Croatia international on Friday and all that remains is for personal terms to be finalised.

Everton boss Roberto Martinez has allowed Jelavic to leave to help his World Cup fortunes as the striker has been reduced to a bit-part player at Goodison Park after the loan signing of Romelu Lukaku.

"Steve Bruce called me and told me that he wants me in his team as a leading attacker," Jelavic told Croatian newspaper Jutarnji list.

"He was very confident during that conversation and after that I agreed to move to Hull City.

"The club suits me and I'm happy that the clubs have found an agreement for my transfer."