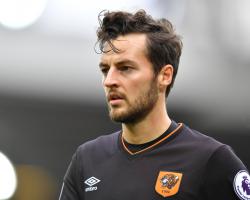 The 25-year-old, who signed for Hull in the summer, has been at St Mary's Hospital in London after undergoing surgery following a clash of heads with Gary Cahill in the first half of the Tigers' defeat to Chelsea on January 22

"Ryan will now continue his recovery and early stages of rehabilitation at home and the club would once again like to place on record its thanks to everybody who has been involved in Ryan's care so far," a statement read.

Mason was visited in hospital by the members of Hull's medical team, whose prompt work was heralded as being key to the player's recovery, as well as the likes of captain Michael Dawson and Chelsea skipper John Terry.

"The number of messages offering support during Ryan's recovery has been quite overwhelming," said Dr Mark Waller of the Tigers

"As with everything in life, there are always lessons that can be learned and one of the most frequently asked questions that myself and the rest of our medical team have been asked in the past week is 'how would we respond if this kind of incident happened on a park pitch during a Sunday League game without the immediate medical support that is in place at professional fixtures?

"We are grateful for the continued investment the club makes in its medical department, which is shown in dealing with situations like this

We all attend regular training to help us to manage any injury sustained on the field of play."