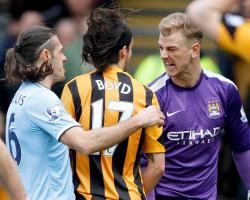 Tigers missing BoydHull boss Steve Bruce will be without winger George Boyd for Saturday's Barclays Premier League clash with West Brom at the KC Stadium.Bruce has accused the Football Association of allowing Boyd to be tried by a "kangaroo court" after his three-match ban for spitting was rejected by an independent disciplinary panel this week.Bruce has maintained Boyd's absolute innocence over the affair following an incident with Manchester City goalkeeper Joe Hart in the second half of the Tigers' 2-0 Barclays Premier League defeat last Saturday.And he has called for an overhaul of the disciplinary system after claiming his club were given neither the time nor space to make a case for the defence in light of the initial FA charge on Wednesday evening.Bruce said: "It's like a kangaroo court - we don't know who sits on it or who is accountable for it."The problem is we can't go down and see anyone, we can't be represented on this commission and we don't know who sat on it."What we got was three referees on Monday morning saying that in their view he (Boyd) deliberately spat at him (Hart)

We're totally disappointed and the whole system needs looking at."For me we don't get a fair hearing because George Boyd would never spit at anybody, but that's what he has been found guilty of and we are aggrieved over it."George feels so strongly about it that if there was legal action he could take he would take it, because they are accusing him of something that is not in his make-up at all."Bruce said Boyd's charge and subsequent ban had thrown his plans for the KC Stadium clash with the Baggies into turmoil as Boyd was due to start the game after two impressive displays as a substitute.Last week's loss to City left the Tigers looking anxiously over their shoulder and Bruce is standing by his prediction his side need two more wins from their remaining fixtures in order to ensure top-flight survival.Bruce added: "I think we'd be very unlucky to go down with 10 wins because you expect to pick up a few draws along the way."It's usually enough to keep you in the league

With so many teams playing each other it could be separated by goal difference."Defender Jonas Olsson has joined West Brom's list of unavailable players.With vice-captain Olsson beginning a two-game ban after reaching 10 yellow cards for the season and first-choice skipper Chris Brunt already out with a knee problem, Gareth McAuley is taking the armband this weekend.Diego Lugano (knee), Billy Jones and Claudio Yacob (both hamstring) and Morgan Amalfitano (knee) all remain sidelined.West Brom boss Pepe Mel claims Shane Long's departure was already effectively a done deal by the time he took over at the club - and has indicated he would have liked to have kept the striker.Spaniard Mel's appointment as head coach and successor to the sacked Steve Clarke was announced by the Baggies on January 9.Long was still a West Brom player at that point and completed a full 90 minutes for them on January 11 as they lost 1-0 at Southampton - a game for which they still had caretaker boss Keith Downing in charge while Mel watched from the stands.Prior to Albion's next fixture, Long's transfer to Hull was then confirmed on January 17, and the Republic of Ireland international is set to line up against his old club on Saturday when they visit the KC Stadium in the Barclays Premier League.Speaking at his pre-match press conference, Mel said of the frontman: "Before I arrived here, Long was out

It was not my problem."Then, asked if he would have liked to have kept Long at West Brom, Mel said: "Of course - Romelu Lukaku (who was on loan with West Brom last season from Chelsea) too."But it was not possible."My job began on January 14, and Shane Long was at Hull."Mel does not think Long will feel he has a particular point to prove against his former employers in Saturday's match."I think not, because for professional footballers, it is normal to change job," Mel said."And besides, the most important thing in football is the fans and what they feel for the club."Shane Long is a good player, a good striker, but we have other players."