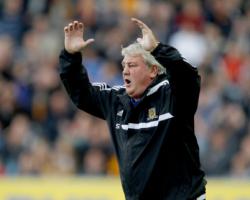 Bruce wary of wounded CityHull boss Steve Bruce has warned his side to beware a Manchester City backlash as the Tigers head into Saturday's KC Stadium showdown looking to take a giant stride towards Barclays Premier League survival.Bruce believes two more wins will see Hull safe and knows many believe now is a fine chance to get one of them against Manuel Pellegrini's men, who head into the game on the back of successive defeats to Wigan and Barcelona.But with City facing a sudden readjustment from dreams of a quadruple to needing a win to sustain realistic hopes of keeping up with league leaders Chelsea, Bruce has cautioned that they could be at their most dangerous.Bruce said: "A week ago everybody was saying can they make it four, and two months ago they were unbeatable

It's coming down to that part of the season where you get cup shocks and different results."But we have got to make sure we're aware there could be a backlash, because of the talent they've got and they players they've got and the expectation that goes with being Manchester City."They've had a difficult week and as always with these big teams, when they have had a difficult week they will want to come out fighting

They still have the league to play for so they will want to come here and turn us over."The Tigers have been in buoyant mood all week after the FA Cup quarter-final win over Sunderland and will be able to recall cup-tied strikers Nikica Jelavic and Shane Long to their squad.Manchester City manager Manuel Pellegrini hopes top scorer Sergio Aguero will be out of action for no longer than a fortnight.Aguero was withdrawn at half-time after feeling a twinge in his hamstring during the midweek Champions League loss in Barcelona.City are still waiting to learn the full extent of the injury but an absence of two weeks would put the Argentinian out of the derby against Manchester United on March 25.Aguero underwent a scan on his return to Manchester and results are expected at the weekend.The 25-year-old missed five games with a hamstring injury in February but Pellegrini is hopeful the problem is not as serious this time.Pellegrini said: "Sergio will know on Saturday what he has

It is 48 hours after the exam when they will know exactly what he has."I really don't know, but I don't think it is really very serious

I am hopeful he will (only) be injured for a couple of weeks."Aguero's latest problem is a blow to City as they bid to recover from FA Cup and Champions League elimination to gain ground in the title race.City have fallen nine points behind leaders Chelsea, but have three games in hand, while focusing on other competitions in the past three weeks.Pellegrini said: "We need to work hard with everyone, with the staff, with all the players

Now we must try to fight for the title in the Premier League."City are also still without striker Stevan Jovetic and defender Matija Nastasic but Pellegrini was hopeful that "maybe next week they can be fit".Right-back Micah Richards is also out with an unspecified knock