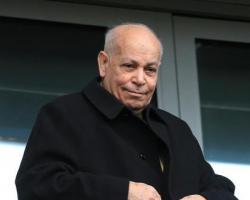 
Jose refuses to talk about Roo


The Blues had two bids for Rooney rejected in the summer and there has been speculation Mourinho is ready to pounce and take advantage to snare the England striker if United fail to qualify for the Champions League at the end of the season.


Asked about Rooney, who is entering the final 18 months of his contract at Old Trafford, Mourinho shook his head and insisted he was not prepared to speak about a player from a team Chelsea are scheduled to face at Stamford Bridge a week on Sunday.


"I don't want to speak about it," Mourinho said.


"We play Man United in a few days. I don't think it's nice to speak about a Man United player.


Mourinho revealed prior to Saturday's match at Hull, when Chelsea could go top of the Premier League for a few hours at least, that Kevin De Bruyne is nearing a departure with two clubs close to agreeing a fee for the Belgium forward.


There have been "zero bids" for Chelsea's other players, despite rumours of moves for the likes of Spain playmaker Juan Mata, Mourinho insisted.


The self-proclaimed Special One was adamant Eden Hazard will not be leaving Chelsea, amid rumours of interest from Paris St Germain.


The Belgium forward, who joined in the summer of 2012 from Lille, has been Chelsea's best player this season.


If Chelsea were prepared to sell - and Mourinho stressed they are not - a world record fee would be required.


Mourinho said: "I am not worried because if his value was around B#40million when Chelsea bought him, if two years later he is twice or three times better than he was when we bought him, I think his value in the market is a crazy value.


"On top of that, he's not a player Chelsea are interested in selling anyway.


"Between our tag of 'not to sell', plus the crazy amount that he can be valued at in this moment, I think there's no chance that Eden is going to leave."


Chelsea played Hull in Mourinho's first competitive game of his return on August 18 and played some scintillating football in a 20-minute first-half spell.


Since then Hull have pulled off some good results, particularly at the KC Stadium, where Liverpool lost in early December and Fulham were beaten 6-0 in the most recent home match.


Mourinho was cautiously optimistic ahead of the Saturday lunchtime kick-off, with second-placed Manchester City and leaders Arsenal not in action until Sunday and Monday, respectively.


"A very difficult match to win there," said Mourinho, who is again without midfielder Frank Lampard (calf) and right-back Branislav Ivanovic (knee).


"We have a chance to win. If we win we will be for a few hours top of the league, but I keep saying the most important thing for us is to secure a position in the top four, which is very difficult for everyone.


"As important as that is to improve the team, to improve the players, keep playing well, improving in details and prepare the team for another period of success like Chelsea had between 2004 and 2012."


Defender Curtis Davies admits Hull were "shell-shocked" by Chelsea on the opening day of the season but believes they are a different side now.


The Tigers' first game back in the Premier League since 2010 was a trip to Stamford Bridge in August, with the hosts celebrating the return of Mourinho.


The Blues immediately took charge of proceedings and were 2-0 up inside 25 minutes, a scoreline that might easily have been extended in a one-sided first half.


But Hull improved steadily as the match progressed, particularly after the introduction of summer signings Tom Huddlestone and Jake Livermore, and the second period was much more even.


Since then, Steve Bruce's side have put together an impressive sequence of results to lie 10th going into the weekend fixtures.


Now they have the chance to show Chelsea how they have progressed and Davies is ready for the challenge.


"Against Chelsea on the opening day, the first 25 minutes shell-shocked us," he conceded.


"It was a lot of the players' first game in the Premier League, it was on TV and with Mourinho going back, there was a lot of hype away from the football side of the game.


"It was a tough start and I think whoever they played at that pace, it would have been hard for them to compete.


"The fact that we managed to come through that 2-0 and make a fist of it in the second half, meant we grew in confidence.


"We knew it wasn't going to come much harder than that, so it was a blessing in disguise as such.


"I think we're a better side now. We're confident we can beat anyone at the KC Stadium.


"But we're not going to kid ourselves that if both of us are at 100 per cent, that we're going to outplay Chelsea and win. We know we have to be right on our game and maybe a side like Chelsea has to be slightly off it."


Hull boss Bruce is hoping a sickness bug that has been affecting his squad has passed in time for Saturday.


As many as nine Tigers players have shown symptoms over the past week but most are expecting to be fully fit.


Paul McShane is out for three to four weeks with an ankle injury sustained at Middlesbrough last weekend.